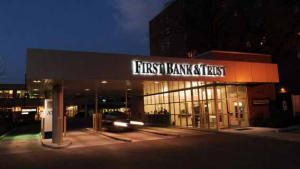 Stockholders of Evanston’s First Bank & Trust were told last week that assets of the bank exceeded a billion dollars during the last quarter before ending the year 2015 at $991 million.

The 20-year-old financial institution will hold its 21st annual meeting on March 15 at 2 p.m. at its headquarters at 820 Church St.

Consolidated balance sheets and income statement for the bank’s parent corporation, First Evanston Bancorp, Inc., were contained in the financial institution’s annual report. It showed total assets at yearend of $991,161,000, up from $910,974,000 a year earlier.

In his annual message to stockholders, Robert R. Yohanan, managing director and CEO, looked back over the bank’s 20-year history and noted that he and his two co-founders, Howard Kain and former Evanston Mayor Jay Lytle, chose Evanston as its headquarters “because it had a large, diverse population of nearly 85,000 people, an excellent business and not-for-profit community, and it had over $2 billion on deposit at its banks.”

Since its beginning with the single location on Church Street, the company now has nine branches in Evanston, Itasca, Naperville, Skokie, and Winnetka.

While virtually every other financial institution chased the real estate bubble a decade ago, First Bank avoided that temptation, he said, because “we believed the risks were too high compared with the risks in our area of expertise—commercial  and industrial lending.”

He credits that decision as “the single most important reason we were able to sail through the recent financial crisis without any significant loan losses or the need to take government assistance.”