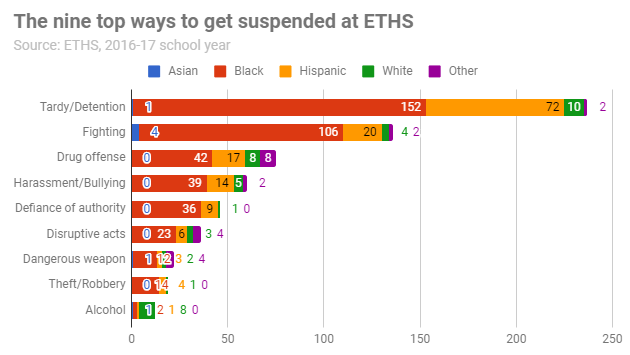 At Evanston Township High School last year, two thirds of the 689 in-school and out-of-school suspensions were given to black students.

A report to the ETHS School Board last October indicates that since 2012-13, the number of disciplinary actions including in-school and out-of-school suspensions and alternative to suspension options increased from 5,137 to 7,189. 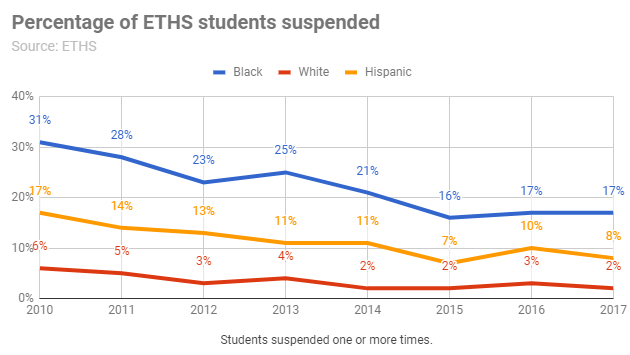 As reported earlier, out-of-school suspension rates for all students have decreased since the 2009-10 school year. However, during the 2016-17 school year black ETHS students were still eight times as likely to be suspended as white students.

Data from the 5Essentials Report, a survey of students, teachers and parents conducted every two years, indicates that ETHS students’ perception of safety did not change significantly between 2015 and 2017. Data from prior years was not available.

Out-of-school suspensions may be required for certain violations, such as drugs, weapons or a serious threat to school safety. In some cases, expulsion may be required.

However, the administration is “looking to reduce suspensions with a more robust alternative to suspension program,” says Keith Robinson, associate principal for educational services, “including educational support, counseling and community service.”

“The goal is to keep kids in school or class. There’s a correlation between seat time and academic achievement,” he says.

Students facing suspension and their parents meet with a dean to discuss the infraction and its consequences. A student may be offered the option of some alternative activities, such as counseling or a meeting with a social worker, to reduce the length of their suspension. According to Robinson, most students and families agree.

Robinson advocates reducing suspension days by involving students in community service with a non-profit agency. “This can introduce them to a career path, establish a relationship in the community, or restore the harm they may have done,” he says. The school also wants to partner with the City of Evanston to develop alternative to suspension activities.

While students are out of school they can use their Chromebooks to communicate with their teachers and email assignments back and forth. After the suspension, students are allowed two days for every day of suspension to make up their work.

So what causes kids to act out?

“It’s hard to pinpoint one or two factors outside that are influencing behavior,” he says. “All of our students are navigating their lives. Circumstances can motivate a lot of kids but overwhelm others.”

“I hate to use an intersection of race or poverty as an excuse or a contributor to some of the challenges that come up,” he says.

On the other hand, “social media really does impact some of the decisions that our students are making,” he says.

“We’re a school. This is a place where students may make a poor choice. I believe this is the best place to help equip them with strategies and techniques to be a lifelong learner,” he says. “We don’t like closing the door on kids. We want to keep them close and support them but still hold them accountable.”