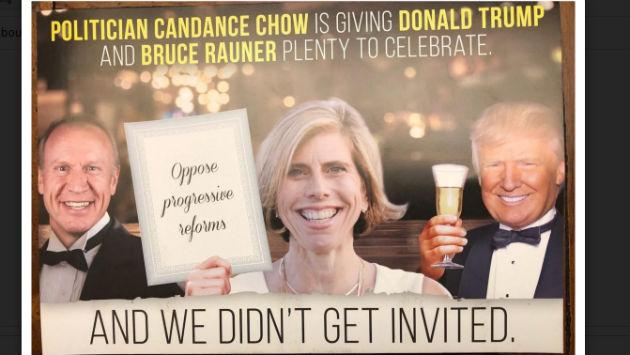 Mike Madigan’s favored candidate in the 17th District Illinois House race, Jennifer Gong-Gershowitz, has launched attacks on one of her opponents that are giving leaders of the New Trier Township Democratic Organization second thoughts about having endorsed Gong-Gershowitz.

The target of the attacks is Candance Chow, who currently serves on the Evanston/Skokie School District 65 board.

One of the attack fliers claims Chow is giving Republicans Donald Trump and Bruce Rauner “plenty to celebrate.”

That’s supposedly because Chow opposed the failed SB 851, which would have imposed a two-year property tax freeze on school districts.

Chow says she opposed it because it represented an attack on K-12 education funding in the state.

A Madigan-controlled PAC has poured at least $37,000 into the Gong-Gershowitz campaign and Chow has drawn Gong-Gershowitz’s ire by calling on her to return the Madigan money.

The president of the NTDO, Judy Mandel, in a newsletter to members Wednesday, said she’s received a string of complaints about the over-the-top, negative and especially nasty mailing pieces from Gong-Gershowitz, a Glenview resident.

The author of the newsletter article, Nels Howard, said members of the group’s executive committee agreed that the mailings “reflected poorly on the endorsed candidate, and by association, our organization.”

The newsletter describes the mailing pieces as being filled with “half-truths, innuendo and convoluted interpretations of events that blatantly distort reality.” and said they are “directly at odds with what our organization stands for.”

In addition, the Evanston RoundTable, in an editorial published today, argued that the fliers should make voters hesitant to vote for Gong-Gershowitz.

The 17th District includes northwest Evanston as well as much of Glenview, Skokie and Wilmette.