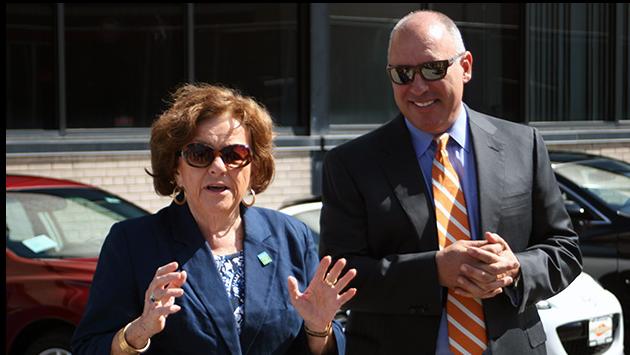 The Autobarn is planning to seek three forms of government assistance as part of its plan to convert the shuttered Shure headquarters building on Hartrey Avenue to a vehicle preparation and storage center for its three Evanston dealerships.

The Autobarn is planning to seek three forms of government assistance as part of its plan to convert the shuttered Shure headquarters building on Hartrey Avenue to a vehicle preparation and storage center for its three Evanston dealerships.

At a news conference this morning at the site, Alderman Ann Rainey, 8th Ward, said the plan represents a big win for the city's economic development efforts.

The city's Economic Development Committee is scheduled to begin discussion tonight of a package of government aid for the project.

Johanna Nyden of the city's development staff said that package would likely include reduced property taxes, a loan or grant from an expanded Howard-Hartrey tax increment financing district and an extension of a sales tax rebate that Autobarn received for expanding one of its existing dealerships.

Fisher says the cost to purchase and rehabilitate the Hartrey building and do more planned work at the Chicago Avenue dealerships is likely to total $8.5 million.

Details of the aid package have not yet been worked out. 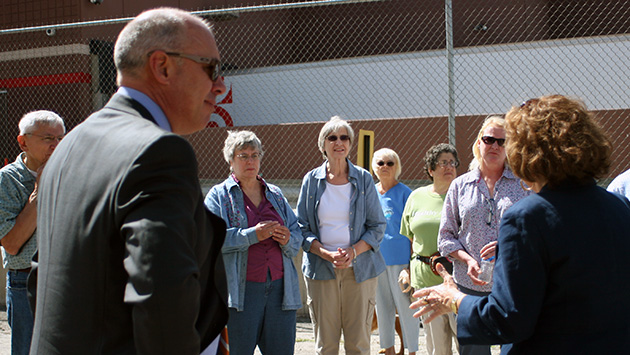 Several neighbors from the residential area that adjoins the Hartrey site turned out for the news conference.

Neighbors whose homes are just east of the old Shure site raised questions about noise, traffic and security at the property and seemed pleased with the answers they received. 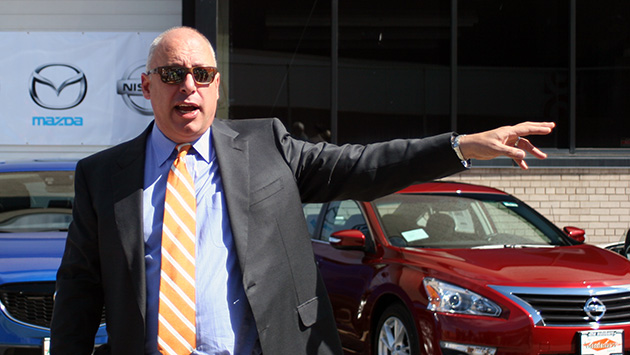 Fisher, pointing toward Hartrey Avenue, said no traffic would enter the facility from that direction.

Instead, he said, access would be from the intersection of Howard Street and Kedzie Avenue, through the shopping center parking lot and past the Vineyard Christian Church building.

He said he's considering LED lighting for the storage lot to reduce light scatter and energy use.

The much of the company's storage space on Emerson Street in Evanston, at the former Robinson Bus Company property, is expected to be turned into rental housing in a planned second phase of the city's Emerson Square low income housing development.

Fisher said while he's generally had few problems with security at that site, last week, with construction underway nearby, 35 cars in the lot were vandalized.

He said he hopes lights, cameras and security gates at the Hartrey site will be sufficient for security there, but that he may have to hire an overnight security guard — but did not plan to use guard dogs on the property.

Fisher, who lives in Evanston, said nearly two dozen different car makes were sold on Chicago Avenue in Evanston in the late 1960s — including exotic ones like Peugeot and Alfa Romeo.

Now his dealerships — which sell Volkswagens, Nissans and Mazdas — are the only ones left.

He said his dealerships have been the biggest sales tax generators in the city in most recent years — exceeded only by Home Depot in 2011.

Update 7/25/13 10:45 a.m.: Wednesday night's EDC meeting was cancelled for lack of a quorum when only five of the 11 members turned out. A special EDC meeting now has been scheduled to discuss the Autobarn proposal at 7:30 p.m. on Wednesday, Aug. 7.