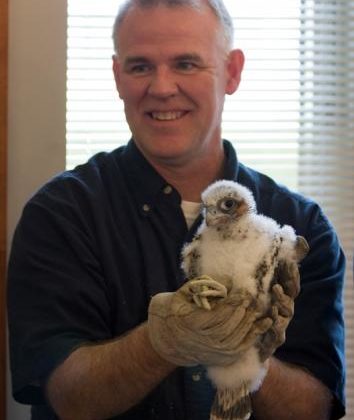 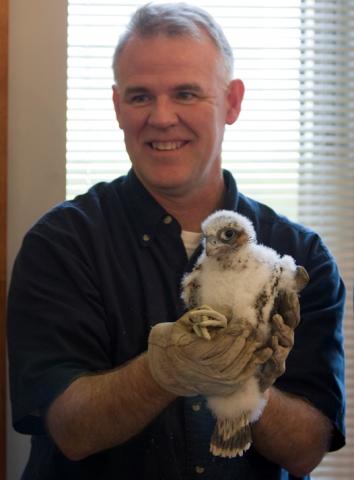 About 50 people crowded onto the third floor of Evanston’s Public Library downtown this morning to watch the banding of three baby peregrine falcons born on a ledge outside the library.

About 50 people crowded onto the third floor of Evanston’s Public Library downtown this morning to watch the banding of three baby peregrine falcons born on a ledge outside the library.

“I work across the street from another nest site in Chicago. I took a day off of work to watch the banding,” said Cathy Gerra who has lived in Evanston for 31 years.

Most children in attendance had front row seats and had the opportunity to touch a falcon egg.

Mary Hennen, an ornithologist from the Field Museum climbed a ladder and took the falcons from their nest that was on a column near the south side of the library. She wore a safety helmet and moved the falcons inside using a cardboard box.

The falcons’ mother, Nona and the father, Squawker flew west down Church Street and squawked in distress after their babies were taken from the nest. The concerned falcons perched on a beam and watched as their offspring were banded for identification purposes.

Hennen laid the baby falcon on the table and put a towel over its head. She explained that covering the falcon’s head helps it relax. “The bands are designed to allow them to grow,” said Hennen.

Dr. Barbara Royal, a veterinarian who owns The Royal Treatment Veterinary Spa took a blood sample that will be examined for genetic research. “My heart rate goes up each time I do this just feeling them moving. I’m always shaking before I start. They are so fast and efficient. The falcons are delicate at this stage, even though they look tough,” said Royal.

The first baby falcon, a female was named Lorraine in honor of Lorraine H. Morton, who was a mayor of Evanston from 1993 to 2009.

The second falcon, another female, was banded and named Hennen in honor of Mary Hennen, the director of the Chicago Peregrine Program for 19 years.

“They usually usually take their first flight 40 days after their birth,” said Hennen. She emphasized that educating the public is an important aspect of banding the bird.

The third falcon, a male, was banded and named Perkins after Dwight Perkins who was known as the “father” of the Cook County Forest Preserve System.

The peregrine falcons often feed on pigeons in the Evanston area noted Paul Gottschalk, the library administrator. Nona and Squawker have nested at the library for the last three years. A webcam with images of the falcons is available on the library website.