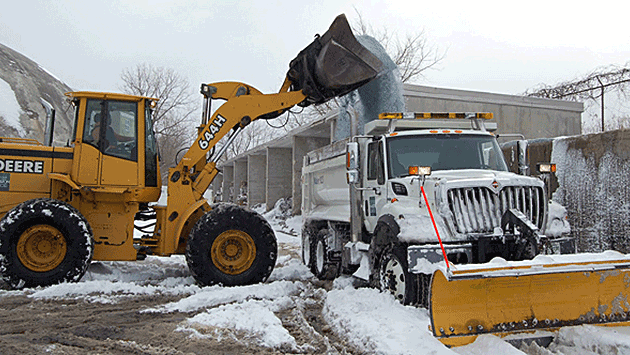 After a mild winter last year, Evanston officials expect we'll return to more normal winter conditions this year, and they're getting ready to deal with it.

James Maiworm, the infrastructure maintenance bureau chief in the city's public works agency, says the city's salt dome is now about half way to its 3,800 ton capacity and more deliveries are scheduled for November to have it full by the start of December.

Maiworm says the private forecasting service the city contracts with is predicting 40 to 45 inches of snow this year, a little above the average of 38 inches. (That prediction is a shade less than what Chicago city officials say they're expecting.)

Winter should start slow and then intensify in January and February, with cold weather possibly extending into spring as well, Maiworm says.

He says city crews have been doing maintenance work on plows and salt spreaders since July "to make sure nothing is significantly damaged."

Fleet Services began installing equipment on the trucks in late September, he added. New employees who will operate plows or equipment have been getting hands-on training, and there will be an all-staff refresher program early next month.

Maiworm says the goal is to have all systems ready to go by Dec. 1.

Here's a look at the winter weather forecast from the National Oceanic and Atmospheric Administration.