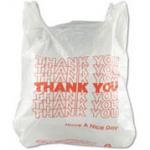 Evanston officials plan to launch a new debate about whether the city should plastic grocery bags with a meeting at the Ecology Center June 5.

Aldermen Monday night approved holding the community dialogue session after their own diverse views on the issue became evident in a discussion about Chicago's recent adoption of a bag ban ordinance.

Alderman Judy Fiske, 1st Ward, picked up on a comment from resident Betty Ester, who said many people who take public transportation or walk to grocery stores need to use the plastic bags.

Ester said paper bags are harder to use because they tear easily and not everyone can afford to purchase the reusable bags favored by environmental activists.

"Some of these things we're excited to implement," Fiske said, may adversely affect "people who are walking and carrying their groceries."

And Fiske said the city should look into expanding recycling options to include plastic film. "We recycle bags for customers in my business," said Fiske, who owns a pet supply store.

The Chicago ordinance will phase in a ban on plastic bags at chain stores over the next two years, but exempts restaurants and permits continued use of plastic for produce and meat products

But Alderman Melissa Wynne, 3rd Ward, said she thinks paper bags are an environmental problem too. She suggested establishing rules like ones she said have been adopted in Ireland where both paper and plastic disposable bags are banned and customers are expected to provide their own reusable bags.

However, Alderman Jane Grover, 7th Ward, said, following the lead of Chicago would "make it easier for us." Evanston wouldn't be standing alone, she said, if it adopted similar restrictions.

Alderman Ann Rainey, 8th Ward, dismissed claims that low-income shoppers would be disadvantaged by a ban.

"I shop at Aldi's twice a week and see people of every single ethnic group, people on walkers, people with three kids" shopping at that store which does not provide shopping bags.

"Even people on walkers can hook their cloth bag onto their walker," Rainey said.

But Alderman Peter Braithwaite, 2nd Ward, said he was concerned that a bag ban might make it more difficult to get a new grocery store to replace the shuttered Evanston Plaza Dominick's market.

The Ecology Center meeting is scheduled for 7 p.m.

A few years ago, the City Council had an extended debate about bag taxes and bag bans which ended with a decision not to take any action on the issue.