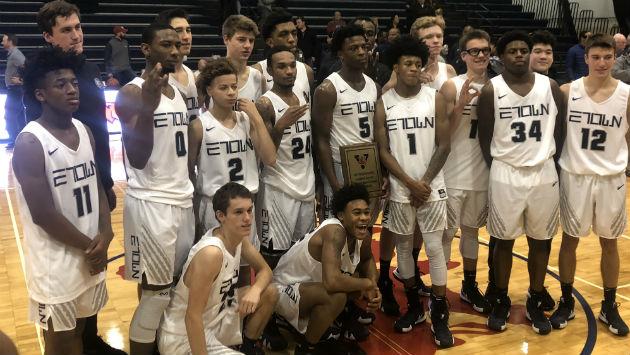 Do the math and you’ll discover just why Evanston’s basketball team captured the championship of the Saint Viator Thanksgiving Tournament Saturday afternoon.

Five players who score in double figures by sharing the basketball will almost always trump a pair of Division I guards.

That was Evanston’s formula for success in a battle of unbeatens as the Wildkits turned back host St. Viator 72-63 despite a combined 44 points by Lions’ guards Treyvon Calvin and Jeremiah Hernandez.

For the losers, Calvin (22 points) and Hernandez (22) both showed why they’re headed to Division I programs at Wright State and Kent State, respectively.

“We didn’t get many points off turnovers today because those two guys just aren’t going to turn the ball over,” said Evanston coach Mike Ellis. “I thought we came out and played really well against two Division I guards and one of the top 10 teams in the state in Class 3A. St. Viator is a really good team, and those two guys can score from anywhere.

“Our guys learned how to play to their strengths last year (on the way to a third place State finish in Class 4A) and you saw how hard we can be to guard when they share the basketball and play together as a team.  When we’re unselfish, we’re hard to guard. We played very well as a team today.”

Evanston was able to cling to a 33-31 advantage at halftime but never led by more than 4 points at any time over the first two periods. But Ellis’ team was able to earn some separation when first Bost and then Gibson connected on 3-point shots on Evanston’s first two possessions of the second half.

The game was a long way from over at that point, but that was just the kind of breathing room the champs needed.

“We really executed well coming out of halftime,” Ellis agreed. “We made the right plays, found the right guys who were open. We felt a little frustrated that we weren’t playing better in the first half, but we just had to weather the storm and play composed.

“Jaylin hit a big 3 for us there and that might have been one of his best games for us today. He’s a playmaker and he’s getting more comfortable and just playing the game, just reacting. He was our unsung hero on the boards. He’s not 6-8, but he played like it today. I think that says a lot about his effort.”

Gibson’s slow start to the season found the 6-foot-3 sophomore unable to finish at the rim despite numerous opportunities over the first 3 games. Saturday, he converted 6-of-9 field goal attempts and achieved career highs in both scoring and rebounding despite the fact that he sat on the bench for 10 total minutes due to foul trouble.

“My main goal today was just to win this game and get a championship,” said the ETHS 16-year-old. “We were a little frustrated at halftime, mainly because our goal was to limit their two guys to 30 points together and they already had what, 23?

“I think I’m  harder to guard this year because my first step is a lot quicker. I can shoot the mid-range jumper, get to the basket and kick it out to the corner, and get all the way to the rim, too. This is a fun team to play on because we have so many weapons and all of us are always looking for the open man. After I hit that first shot (in the second half), I knew that Lance or Jaheim would keep finding someone to keep that momentum going. And there’s no stopping us when we get that momentum going.

“We’re not focused on winning this one tournament, though. We’re just focused on playing together, sticking together and getting back to where we were last year.”

Gibson netted 6 points in the third quarter, same as Holden, as the Wildkits pushed the lead to double digits before settling for a 54-46 advantage entering the fourth quarter. The Lions were able to close to within 6 points twice, the last time at 67-61 with 40 seconds left on a flashy dunk by Hernandez.

But Jones converted a pair of bonus free throws at the other end, and a Bost free throw and a steal and lay-in by Holden in the last 20 seconds sealed the victory.