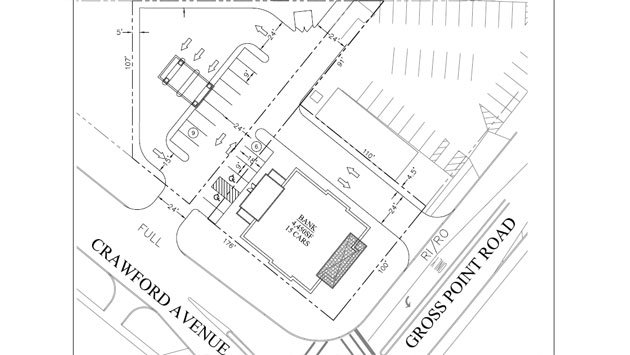 Developers of a proposed Chase Bank branch in northwest Evanston have cut back the project’s size in response to neighborhood concerns.

Developers of a proposed Chase Bank branch in northwest Evanston have cut back the project’s size in response to neighborhood concerns. Edgemark Development LLC presented the revised plans to the Evanston Plan Commission Wednesday night.

Top: Edgemark’s Richard Sapkin presenting the new proposal to the commission. Above: The new site layout. The new proposal, for the northwest corner of Crawford Avenue and Gross Point Road, calls for combining the corner lot now occupied by a shuttered gas station with the vacant lot just west of it on Crawford. The original plan would have also included a third parcel on Crawford, now the site of a single family home. That plan had drawn objections from city officials as well as neighbors for the impact they claimed it would have on the nearby residential neighborhood. The new plan has won the backing of city staff, and drew support from some neighbors at the Plan Commission meeting. But other neighbors still had objections to it. They persuaded the commission to continue its hearing on the project until May 9, to give the neighbors more time to review it. Developer Richard Sapkin said the new plan would provide a more urban design, with the bank building close to the street at the corner. 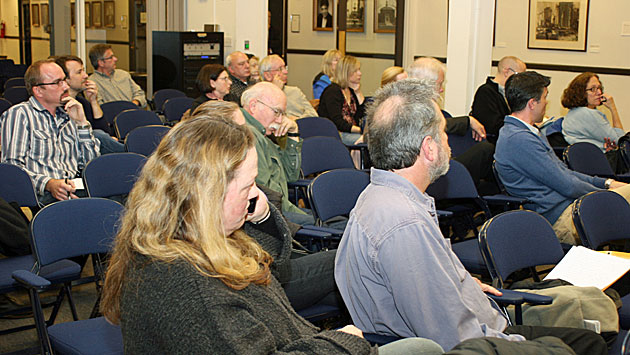 Neighbors listening to the developer’s presentation. “It’s a design that the neighborhood and the city will be proud to have,” Sapkin said, saying the building would have a brick and stone facade. The project would also vacate an existing alley that separates the two parcels. The new design would reduce the five curb cuts on the property now to just two. One, on Crawford, would allow drivers to enter and leave in both directions. The other, on Gross Point, would allow only right turns for entering and exiting traffic. Neighbor Craig McClure, who lives on Princeton Avenue, said he favored the revised design, arguing that it will get rid of a blighted property at no cost to the city. He also said that with rising property taxes, the city needs all the commercial development it can get. But Joshua Huppert, of 2630 Crawford Ave., said he wanted the continuance. He said neighbors had circulated a petition against the previous plan to require a super-majority vote by the City Council to ultimately approve the zoning changes the project would require. And he wanted time to circulate new petitions if they would be requried for the revised plan. Huppert said he was also concerned about the possible impact on property values of the new bank branch, although a real estate appraiser hired by the developer said there was not indication that the bank would have an adverse affect on property values.