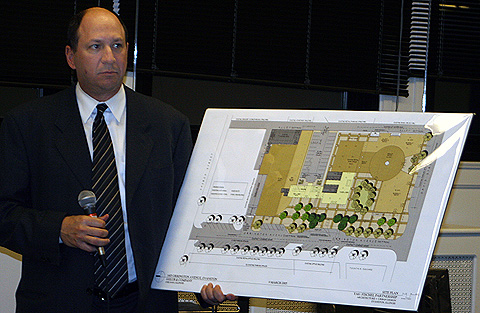 Lee Golub said his firm wants to construct new retail space at the south end of the site soon, but doesn't know when, if ever, it will be economically feasible to build the rest of the project — which includes relocating the parking garage ramp that now occupies much of the property's Orrington Avenue frontage.

The plan calls for a new ramp, perpendicular to the street, that would be built into the north end of the vacant 1629 Orrington building.

The bank high-rise with its large open plaza was built in the late 1960s. It was Evanston's first modern skyscraper and remains, by a small margin, the city's tallest building.

The City Council approved the partial redevelopment of the property in June 2005 and imposed a completion deadline of the end of this year.

A recent letter from the developer's attorney had requested a one-year extension of the deadline.

When it became apparent from the development team'sÂ comments at the meeting that parts of the project might never be built, the aldermen postponed action on the request until the next Planning and Development Committee meeting.

"We basically have a wasting asset over there," Mr. Golub said, "The plaza needs over a million dollars in repair work because it's leaking into the underground garage." 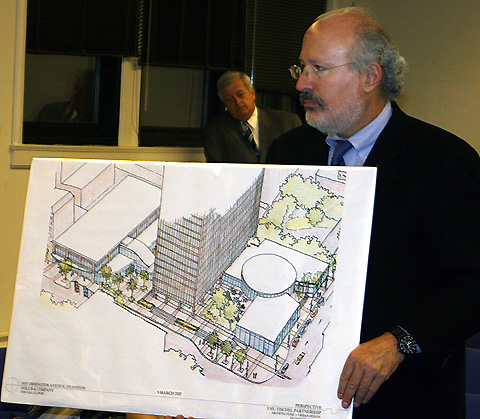 "We have the opportunity to create a wonderful situation on the south side of the site," he added, with the proposed 13,000 square feet of new retail space, which he said would likely include service retailers — a bank, coffee shops and restaurants. "We really want to get some restaurant activity here," he said.

But he said he's had no luck attracting a new tenant for the former Border's bookstore at the north end of the site. "We've tried two grocery stores and Staples," he said, but none of the potential tenants have signed on.

The 2005 plans called for building an at-grade enclosed walkway connecting the two buildings with 20 surface parking spaces for the proposed supermarket behind that. Those changes as well as the new ramp would be put on hold if the developer's request is approved.

Alderman Ann Rainey, 8th Ward, said, "Given the improvements about to be made, I don't have any problem extending this. I don't necessarily care about the ramp any more. To get a building on that corner to protect the public space there I think is a big plus."

Alderman Edmund Moran, 6th Ward, who voted against the plan in 2005, saw an opportunity to kill the project by denying the extension. He called for conserving the open space that now exists on the bank building plaza.

But Alderman Melissa Wynne, 3rd Ward said the 1960s-vintage plaza, and others like it have been demonstrated to be failures. "This space is awful to walk through or even spend five minutes in any time of year," she said.

Alderman Steve Bernstein, 4th Ward, said, "I want to eliminate that ramp. It's a danger, as far as I'm concerned and prevents people from walking safely across the street." Relocating the ramp would also allow for more on-street parking.

But David Reifman, the developer's attorney said the ramp project "could only occur as some kind of public-private partnership. I don't think we ever represented that it could go forward on any other basis."
Â