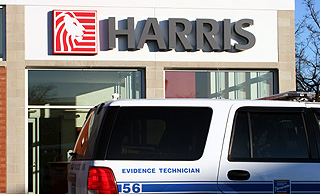 An Evanston Now reader reported that shortly after 1 p.m. this afternoon police were searching the forest preserve a few blocks south of the bank looking for possible suspects in the robbery.

Police Commander Tom Guenther says two men, one armed with a handgun, entered the bank, approached a teller and announced a holdup.

The teller gave the robbbers an undetermined amount of cash, and they then fled the bank on foot.

A police search of the area failed to locate the robbers. Guenther said both robbers were described black men about 30 to 40 years old.

One was said to be about 5-feet-11-inches tall and weigh about 200 pounds. He was dressed in a brown jogging suit, a black hat, black shoes and sunglasses.

The other was described as about 5-feet-9-inches tall and heavy-set. He was dressed in a gray jobbing suit, a black skull cap, black shoes and sunglasses.

School District 65 officials say that, based on reports from police, they initially locked down all city schools after the bank robbery, but lifted the restrictions from all schools except those on the city’s north side by about 1:45 p.m.

They say all restrictions were lifted at 2:15 p.m. when police told school officials the threat was over, and students were dismissed from school in the usual fashion.