Five of the nine banks that serve Evanston gained market share over the last year. 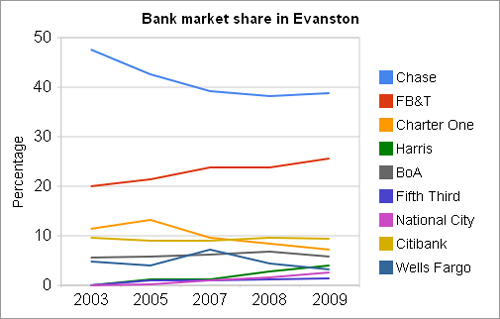 The market leader, Chase Bank, which acquired Bank One and Washington Mutual, gained 0.8 of a percent to a 38.9 percent share.

Chamber President-elect Steve Hagerty said banks that have gained market share tend to have been active in the chamber.

“The data makes very clear that banks that have engaged their management teams and employees in Chamber activities and programs, are more likely to reap financial benefits in the competitive Evanston marketplace further demonstrating the value the Chamber offers to its members,” said Hagerty, the president of a 65-person management consulting firm that bears his name.

The overall size of bank deposits in Evanston grew 4.5 percent in the last year, perhaps due to account holders shifting money away from equities into cash.

The Evanston Chamber’s analysis also noted that in contrast the banking industry in most of the nation, which has seen notable consolidations because of mergers and acquisitions, the Evanston market is actually more diverse than it was six years ago.

The analysis by The Chamber’s Economic Development Research Division does, however, have its limitations, said Evanston Chamber Executive Director Jonathan Perman.

The data only concern deposits and do not reflect loan activity of banks, which may be an even more important indicator of a bank’s impact on the commercial sector of Evanston. Nonetheless, he said, deposit data clearly gives the observer a sense of consumer preferences in the local market.