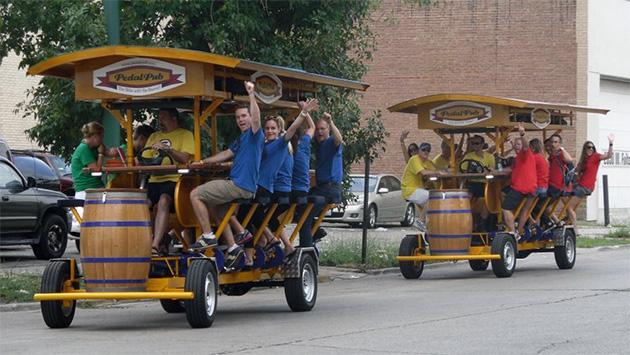 A company shutdown this week by the City of Chicago in a licensing dispute may try to move its operation to Evanston.

Pedal Pub announced Monday that it has closing its Chicago operation on orders of the city's department of Business Affairs and Consumer Protection.

It had been running beer bike tours in Chicago for three years while seeking a license, but appeared to fall through the cracks of city licensing schemes.

And a company official says their next stop may be Evanston, because it's a suburb that still has a city feel — and where traffic moves slowly enough for safe operation of the bikes.

The bikes, which retail for $40,000 each, feature seats for 16 people who pedal the contraption, while a driver controls the steering and brakes.

They've been used in Europe for years, as this 2008 YouTube video from Germany confirms.

But Mayor Elizabeth Tisdahl, Evanston's liquor commissioner, seemed cool to the idea when asked about it by Evanston Now.

"Winter is coming. That may diminish enthusiasm for the concept," she said, but added, "If they apply for a license, we will talk with them."

And, in Minneapolis a resident who didn't like the noise created by cruising drinkers, started an "I Hate the Pedal Pub" Facebook page, which was removed by Facebook after PedalPub's lawyers complained.