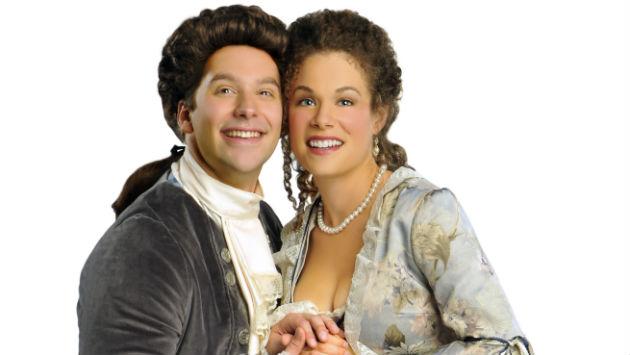 Fans of Broadway musicals hold a special place in their hearts for Leonard Bernstein’s “Candide.” They know that every production promises more than just an evening’s entertainment—it will be an adventure.

The adventure comes to Evanston when Music Theater Works unveils an all-new staging of Bernstein’s classic on June 3rd at Cahn Auditorium.

Candide, an idealist young man sent around the globe by outrageous misfortune in search of the meaning of life and his true love, the beautiful Cunegonde, was the brainchild of 18th century philosopher and wit Voltaire. His bitterly funny attacks on intolerance and corruption inspired Bernstein to write his grandest work, full of dazzling music and incomparably witty lyrics (by Richard Wilbur, Stephen Sondheim and Dorothy Parker, among others).

It is a big piece in every way, and Music Theater Works (formerly Light Opera Works, beginning its 37th season with a new name) has always embraced the big. Nevertheless, shows rarely come as big as “Candide.”

A look around the Music Theater Works rehearsal room hints that something extraordinary is going on. There appear to be enough costumes and props crowding the large space to furnish a whole season of musicals. However, do not be deceived. “This is all for ‘Candide!’” laughs Katie Beeks, Music Theater Works’ production manager. “We’ve never had this many costumes—we’ve got peasants, pirates, soldiers, sailors, aristocrats, courtesans—we’ve even got the Spanish Inquisition.”

Candide’s travels take him through Germany, Holland, France, Portugal and Spain, over the Atlantic to South America (including a stopover in the lost city of Eldorado), then back across the ocean for a climax in intrigue-filled Venice. “It’s quite a journey,” says Beeks. “We have four different boats. And twelve steamer trunks!” When you are producing “Candide,” travelling light is not an option.