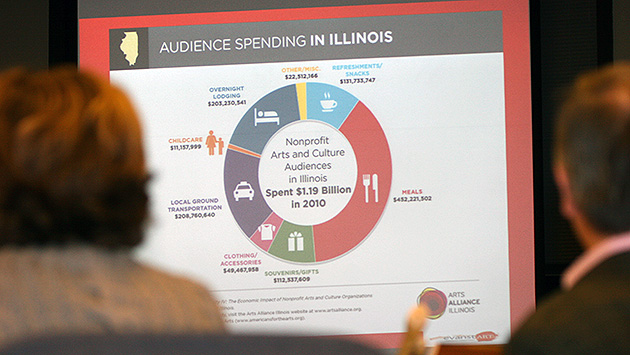 Evanston arts advocates waved around some context-free numbers as they presented the evanstARTs study to aldermen Monday evening.

Add context, and the advocates’ case for the arts as a big driver of economic activity that justifies large investments of city tax dollars looks far less compelling.

The evanstARTs report based its numbers on a study by the advocacy group Americans for the Arts which claims Americans spent a total of $135.2 billion in 2010 as a result of their participation in events sponsored by nonprofit arts organizations.

That’s a big number. But what goes unmentioned is that it represents less than one percent of the nation’s $15 trillion gross domestic product.

And it turns out that more than half the $135.2 billion comes in the form of ancillary spending by audience members — most of it on food eaten before and after attending an arts event.

In attributing all that spending to the arts, the group assumes patrons would have stayed home and starved — spending nothing on food — if they hadn’t gone to the event.

Based on a formula contained in a breakout of Illinois data from the national study, evanstARTs calculates that the arts generate nearly $20 million in household income for Evanston residents and support 683 full-time-equivalent jobs — a lot of those, apparently, at local restaurants.

But that’s only 1 percent of total Evanston household income and about 1.7 percent of Evanston’s total workforce.

This doesn't mean Evanston should spend nothing from tax revenue to support the arts. But any spending needs a careful cost-benefit analysis — something totally missing from the executive summary of the report.

Evanstonians can only hope that the full report, to be released later, may contain more substance.

An Evanston Now analysis concluded that the city had committed to spend over $10 million on all economic development efforts in 2012.

An industry, like the arts, that based on the advocates own figures accounts for roughly one percent of the city's economic activity, might reasonably expect to receive about $100,000 a year from such a pool of money.

While the report presented Monday offers a smorgasbord of possible strategies, its first immediate goal is to "create a new cabinet level position" in city government to focus on the "arts sector and economic development."

Evanston government, of course, doesn't have a "cabinet." But one could conclude that the authors mean a "director level" position  — one of the employees who report directly to the city manager..

More administrative overhead — it seems questionable whether that's the best place to start in strengthening the arts industry in Evanston.

Arts and Economic Prosperity IV, Americans for the Arts (.pdf)