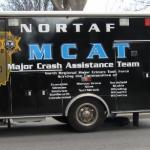 A collision in downtown Evanston this morning between a bicycle and a motorcycle resulted in head injury to the bicyclist, who was listed in critical condition at Evanston Hospital following surgery.

The collision occurred at about 9 a.m. on Church Street between Orrington and Chicago avenues.

The injured cyclist, who police said was wearing a helmet at the time of the crash, was transported to the hospital by Fire Department paramedics.

The operator of the motorcycle, a 27-year-old Chicago man, was not injured, police said.

The EPD Traffic Bureau located a witness who observed the bicyclist cross Church Street and make contact with the motorcycle.

The 600 block of Church Street was closed to traffic for about three hours while Evanston police, assisted by the regional Major Crash Assistance Team, conducted their investigation.

The motorcyclist was not charged, police said.

Top: File photo of the mobile laboratory of the Major Crash Assistance Team that aided in the investigation of the accident.