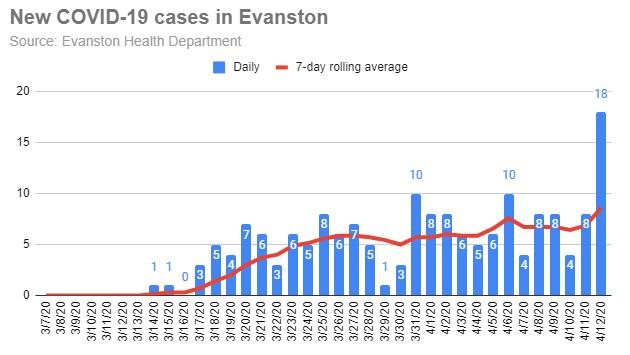 Evanston reported its largest increase in COVID-19 cases of the pandemic so far today — 18 new cases, bringing the total confirmed infections in the city to 174.

The increase here coincided with a spike in the number of tests completed statewide, but it was not clear to what extent the increase here may have been the result of an increase in testing locally.

Gov. J.B. Pritzker, in his news conference this afternoon, noted that the increase in tests statewide reported today did not result in an increase in the overall percentage of positive test results.

The governor said that the increase in testing reported today was “great news” — that the state is now getting closer to his goal of being able to test 10,000 people for the disease each day.

He said there continues to be evidence that the state may be close to seeing a leveling off of novel coronavirus cases, and that today’s death toll statewide is the lowest it’s been in six days.

But, he said, people will need to stay the course, and continue to stay home in order to actually achieve the needed reduction in new cases.

“You don’t know whether you have peaked until you start going down,” he said.