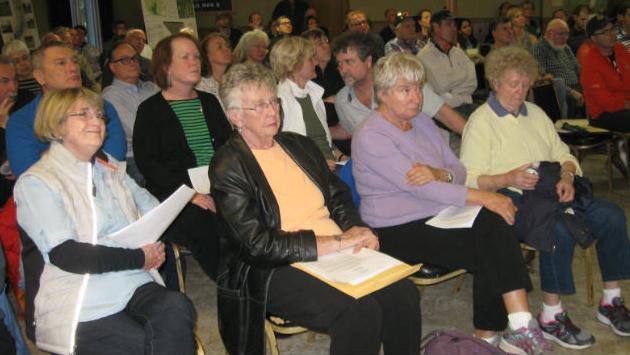 About 75 persons filled the small meeting room of the American Legion Hall on Central Street in Evanston Friday night to hear plans for a significant upgrade of the 18-hole golf course affectionately known as Canal Shores.

Once known primarily for running behind on paying its water bills to Evanston and Wilmette, the recently overhauled Board of Directors of the Evanston Wilmette Golf Association asserts it has now paid its bills and is gearing up for a campaign to raise $6 million in time to celebrate a significant improvement of its facilities by the time of its 100th anniversary in 2019.

Concerned neighbors whose properties abut the course, that runs along the North Shore Channel in Evanston and Wilmette, were eager to learn whether the unique sports venue will improve or harm their property values over time.

Some of the questions asked of the board began with the statement, “I’m not a golfer, but…”

The audience, after listening to a review of plans from golf course designer and landscape architect Dave Zinkand of Arizona, were primarily interested in whether they could still walk their dogs on the 40-acre course, the chances of stray golf shots hitting their patios, and whether removal of trees along the waterway would be harmful to the ecology of the area. 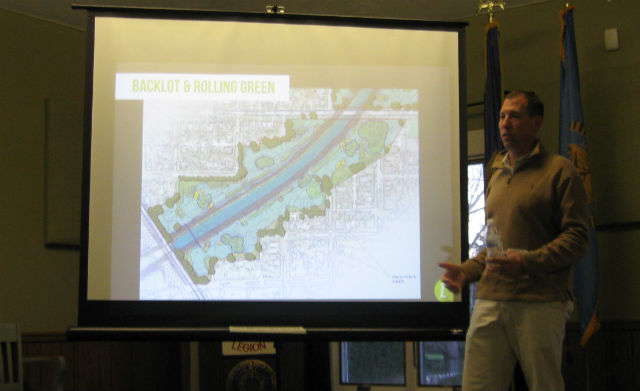 Members of the board assured them that their concerns would be addressed as they attempted to turn the facility into a world-class asset that would be beneficial to youngsters in the community who had ambitions of emulating Luke Donald, the pro golfer who spent many hours practicing on the links during his college days at Northwestern University.

Zinkand explained that the current thinking is to break the course into a 12-hole professional course supplemented by a “backlot” portion described as “a dynamic practice facility that doubles as a six-hole short course.”

Zinkand noted that time-stressed golfers of the 21st Century are increasingly wary of devoting three to four hours to traverse a traditional 18-hole course and that a 12-hole facility is gaining greater acceptance throughout the world of golfing.

The biggest problem facing the board today is raising enough funds from traditional sources such as greens fees and parking revenue during Northwestern football games to enable the facility to be self-sustaining, as it receives no funding from taxpayers, nor does it intend to ask for public funding.

It is hopeful of enticing Northwestern and public schools in Evanston and Wilmette to rent the course for training future Luke Donalds and Tiger Woods and for encouraging more local residents to host “large corporate and charitable golf outings, alumni association reunions, birthday parties, bar and bat mitzvahs, neighborhood parties,” and the like.

One resident suggested they set up dining facilities on the course, but a director said they’ve tried that, but it failed to bring in sufficient revenue to be self-sustaining.

On the ecology side, officials admitted that a number of trees along the banks of the channel would have to go, but their intention was to weed out the “invasive species” such as buckthorn and to install more native species that would thrive and turn the channel into an ecologically sustainable area that would add beauty as well.

The upshot of the meeting was that the plans are still in the formative stage and that nothing would be started until the board could be assured that sufficient financing would be available. That means raising $6 million in grants and donations in the next two years.