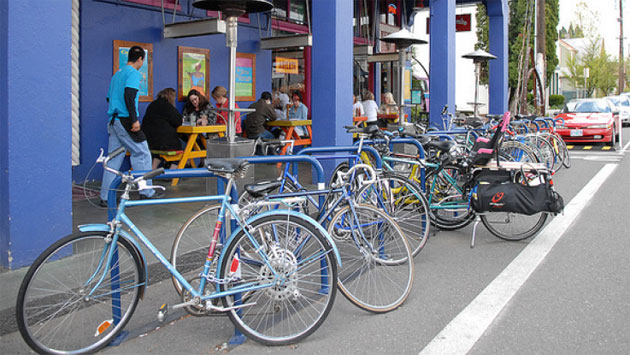 Members of an Evanston city committee Wednesday night objected to staff plans to test on-street bike parking over fears it would cut into parking meter revenue.

The Transportation and Parking Committee was told by City Engineer Paul Schneider that because most downtown sidewalks are narrow, it's difficult to create more space for bike parking without using the street.

He pointed to "bike corrals" some other communities have created in on-street parking spaces and said a corral with racks for a dozen bikes could be located in the space now used to park two cars.

He suggested testing the concept on Benson Avenue outside the Evanston Athletic Club — which now has a large collection of bikes locked to poles along the narrow sidewalk.

Schneider said buying the racks and other material needed to create a corral would cost about $2,000.

He said two metered parking spaces in a prime downtown location can generate $6,000 a year in revenue for the city, and noted that the displaced parkers might move to under-utilized city garages, letting the city recoup the lost revenue from the meters.

But committee members seemed convinced that all revenue from any meters taken out would surely be lost.

And they debated whether exercise enthusiasts who drive or bike to the club are more unwilling to walk an extra few feet to the club's front door.

Alderman Judy Fiske, 1st Ward, suggested adding more bike racks under the CTA viaduct at Clark Street, about 300 feet from the athletic club. That would provide covered parking for the bikes, she said.

But Schneider said existing bike racks adjacent to the CTA right-of-way along Benson are underused. "What we're finding is that people really want to park bikes at the location where they're going," he added.

Committee members also seemed convinced that club patrons who drive would be unwilling to walk the roughly 700 feet from the club to the city's Maple Avenue parking garage.

A possible compromise was offered by Alderman Coleen Burrus, 9th Ward, who says she used to work at the athletic club.

She suggested asking the club's management to pick up part of the cost of the bike corral test.

"I know the members want this," Burrus said, "and I believe they [the club's management] would be willing to pony up some money for it."

The committee asked city staff to explore that option with the club's management.

Top: A image from City Engineer Paul Schneider's presentation of a bike corral in another community.