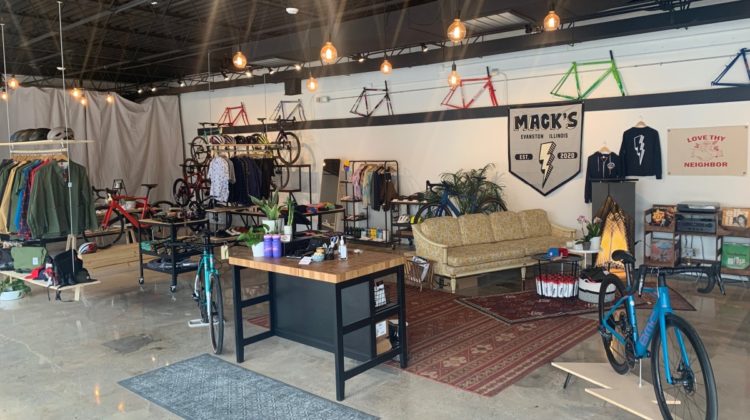 Mack's Bike Shop, in an image from the shop's website.

Bicycle chains are caught up in the supply chain. So are bicycle tires. In fact, so are entire bicycles themselves.

Cycle shops in Evanston report the same challenge others are facing across the country: Supply is down due to COVID-related manufacturing delays in Asia, but demand for bicycles is up here at home.

Sam Mack, co-owner of Mack’s Bike and Goods on Ewing Avenue, says “I’ve been doing this for 20 years, and have never experienced a summer like this.”

“I thought last summer was bad,” Mack says. “But this summer is worse.”

“There are no 11-speed bike chains available in the entire country,” he adds.

The story is similar at other bike shops around town. At Wheel and Sprocket on Davis street, mechanic Liam Ouweleen says, “There’s been a severe shortage of pretty much everything since March 2020” when the coronavirus pandemic hit.

“I have people committed to waiting a year-and-a-half for road bikes,” he says.

Even basic repairs are taking longer because parts are not on the shelf.

“If you’ve got a flat tire,” Ouweleen says, “you’re out of commission for a month.”

At Bucephalus Bikes on Lake Street, co-owner Ceclia Wallin says the parts squeeze is fueled by a shortage of raw material like aluminum and rubber needed to make those parts.

“A bike is a simple machine,” she says. “But parts are from Japan, Portugal” and other places.

At Mack’s, Sam says finding parts was almost like a scavenger hunt. “There are 2,000 independent bike shops in the country, all fighting over a small quantity of parts.”

“It was like buying concert tickets,” he says. “You just keep hitting ‘refresh’ on your computer.”

COVID-19 was a perfect storm for the bicycle business. Factories in Asia closed due to the virus. International shipping slowed down for the same reason.

But at the same time, in the U.S., and especially in a bicycle-friendly town like Evanston, two-wheelers were the perfect way to get socially distanced exercise, or even a way to get to work (if work was open) without taking the train or bus.

Demand skyrocketed just as supply plummeted. It was, please excuse the pun, a vicious “cycle.”

For Sam Mack, who opened his own Evanston shop after working elsewhere for many years, the timing could not have been worse.

Mack’s Bike and Goods opened its doors on March 13 2020, “the day,” Mack says, “that COVID became a national emergency.”

“We had every excuse to pack it in,” Mack says. But bike shops were allowed to stay open as essential transportation businesses (plus a place where wheelchairs could be repaired), so Mack improvised, with items like custom-built bikes.

Factories and parts suppliers have reopened, but Ouweleen at Wheel and Sprocket says there is still a “huge backlog” of orders that will take months to fill.

At Bucephalus, Wallin says she finally expects things to get better, but agrees it won’t be fast.

And at the store which opened on COVID day, Mack says it’s been a struggle since March 2020, “but it’s hard to complain when I’m still here.”