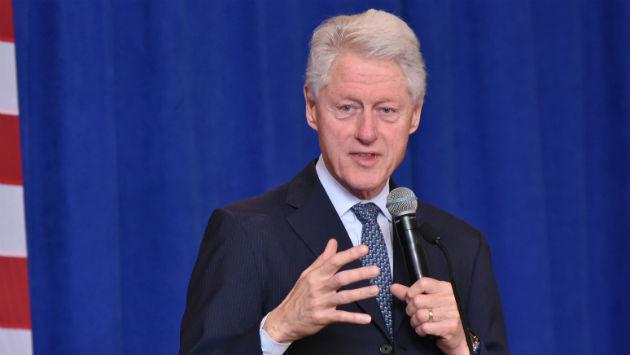 An estimated 1,000 persons–about 750 inside and another 250 standing outside–came to Evanston's Beth Emet The Free Synagogue Tuesday to attend a rally for Democratic candidate Hillary Clinton, featuring former President Bill Cllinton as the main speaker.

The line outside formed more than an hour before the scheduled 10:30 rally began, and snaked around from the front of the synagogue on Ridge Avenue at Dempster Street, and reached well past the corner of Dempster and Asbury Avenue before the doors opened to let them in. 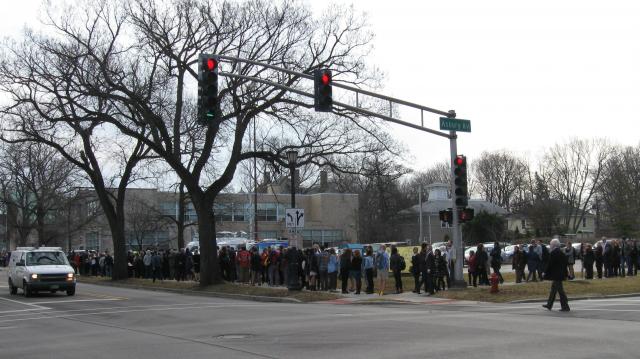 The line at Dempster and Asbury waiting to enter Beth Emet

It was a major Chicago-area media event, with a line of television cameras at the rear of the room and dozens of news professionals and dozens of budding journalists from the Medill School of Journalism at Northwestern roaming throughout the crowd, many of them with cameras in hand. 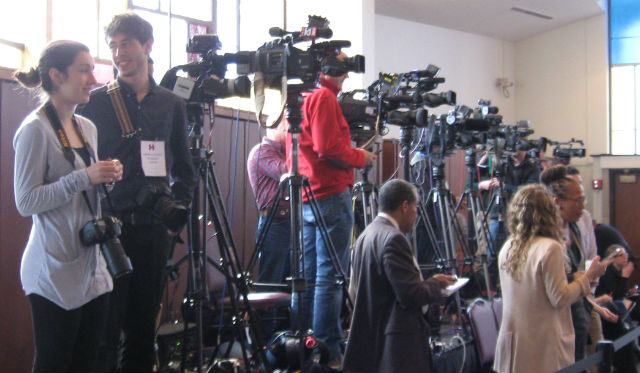 The media covering the rally

Evanston Mayor Elizabeth Tisdahl opened the proceedings, reading a statement about the importance of a Clinton win to the City of Evanston, focusing on recent shootings in the city that she implied were partially the result of weak gun-control laws that Clinton voted in favor of while her rival, Sen. Bernie Sanders (D-Vt.), voted against.

She was followed by U.S. Rep. Jan Schakowsky, who referred to Hillary Clinton "as the most qualifed presidential candidate since George Washington," which drew laughter from the crowd.

She noted that, during his administration, former President Clinton raised taxes on the rich, to predictions of economic calamity from Republicans in Congress, but that he ended his last year by turning over a budget surplus to George W. Bush, "who, of course, turned around and squandered it."

He leveled criticism at the Republican party in achieving legislation in the states that hampered the ability of minorities to vote and of some Supreme Court decisions, especially the Citizens United decision on campaign finance.

He told a number of stories about the impact his wife had on public policy. including health care, international diplomacy, womens issues, and economic aid to small business.

But, with the latest Chicago Tribune election poll showing Hillary Clinton leading Bernie Sanders by 42 percentage points, the main emphasis of the rally was to encourage supporters to turn out at the polls next Tuesday.