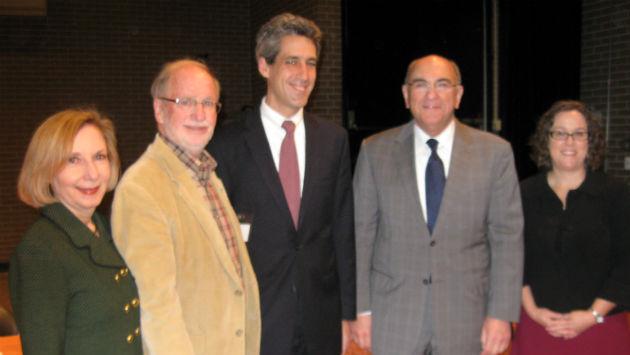 Evanston state Sen. Daniel Biss told a town hall meeting in Skokie today that they need to get confrontational with Illinois Gov. Bruce Rauner if they expect any action on the state budget.

An obviously frustrated Biss said he’s lost sleep over the fact that the state has been without a budget for more than seven months and that “the situation is so removed from human consequences that it makes you ill.”

Speaking on a panel at the 15th annual town meeting of the Turning Point Behavioral Health Care Center at the Skokie Public Library, the Democratic senator advocated “direct, visible, confrontational activism” aimed at pressuring the governor to negotiate with legislators on the budget.

He was joined by Rep. Robyn Gabel (D-Evanston), who advised the audience to “make a really, really big fuss.”

Also on the panel was Leslie Combs, an aide to U.S. Congresswoman Jan Schakowsky, who agreed that elected officials pay a great deal of attention to calls from their constituents.

“They hear the phone ringing,” she declared.

Another Evanstonian on the panel, Cook County Commissioner Larry Suffredin, said “the one person who sleeps at night is Gov. Rauner.”

Suffredin noted that the other elected officials on the panel, which included Skokie Mayor George Van Dusen and state representative Lou Lang (D-Skokie), were all Democrats and that the nearest Republican state legislator is in Palatine.

The audience consisted mainly of supporters of Turning Point, a not-for-profit outpatient mental health center which provides services to people in this area, largely funded by the state.

As with so many other social service agencies, Turning Point has been faced with the prospect of reducing staff and curtailing services due to uncertainty over receiving promised funding from the state, which they said amounts to more than a half million dollars.

The organization’s chief executive officer, Ann Fisher Raney, contended that “things are getting worse” and that “lots of people are giving up hope. We are in new and dangerous territory.”

The state legislators said that the governor has focused on getting the Democratic-controlled legislature to approve what he calls his “turnaround agenda” that the Democrats contend will weaken unions in the state and be harmful to middle class workers.