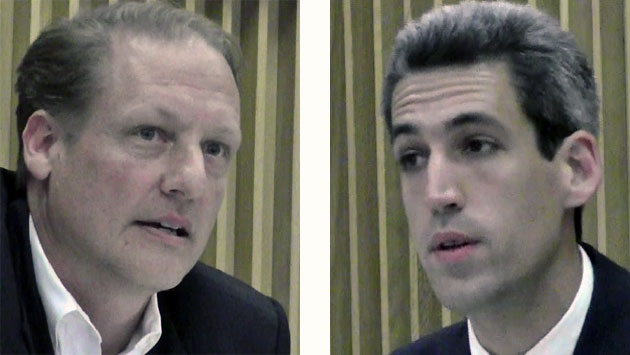 The men who would represent Evanston in the state senate disagreed about gun control, taxes and voter ID requirements at a forum in Wilmette today.

Democrat Daniel Biss, who's completing his first term in the state house, said he wants keep the state's ban on carrying concealed weapons.

Farkas said he would repeal the ban — the last in any of the states. But he said he'd probably prefer replacing it with a scheme that would give officials discretion about who could get a concealed carry permit.

Biss said he favors a graduated income tax, while Farkas generally rejected the concept, although he said he might support a plan that would exempt residents with poverty-level incomes from paying the state tax.

The candidates managed to agree on some issues raised by questions posed at the forum sponsored by the League of Women Voters.

Both said they are pro-choice, although Biss noted that he's been endorsed by pro-choice groups including Planned Parenthood.

Both said they favor measures to impose similar accountability standards on charter and regular public schools and said they support consolidation to reduce Illinois' highest in the nation number of units of local gobernment.

They also agreed that hydraulic fracturing, or "fracking," needs more study before it's permited for use in oil and gas drilling in Illlinois.

While Biss has been widely acknowledged as a leader in efforts to reduce the state's budget-busting public pension problem, Farkas doubted his opponent's ability to act in the best interest of voters given the financial backing he's received from unions.

Biss has received backing in this campaign from the Illinois Federation of Teachers, among other groups that also include the state chamber of commerce. It's been easy for Farkas to claim indendence on the pension issue, since he's raised under $13,000 for his campaign, compared to over a half million for Biss.

Biss said requiring voters to show a photo ID would be a terrible idea that would cut voter turnout among the poor, minorities and the elderly for no benefit, because the fraud it is aimed at preventing hardly ever happens now.

But Farkas said people need to show photo IDs to get into office buildings these days and the government could provide the IDs for free to low-income residents.

About 50 people attended the forum at Wilmette's village hall.