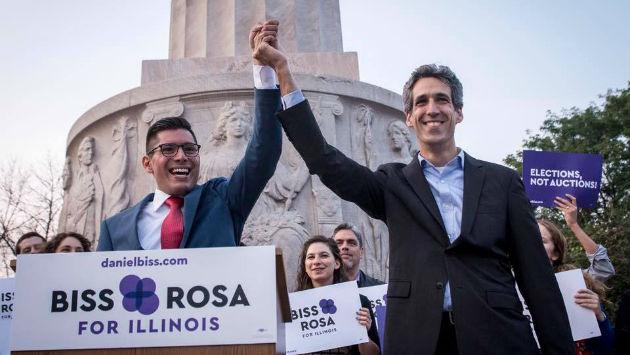 Evanston’s state senator and a candidate for Illinois governor on the Democratic ticket, Daniel Biss, has selected Chicago Alderman Carlos Ramirez-Rosa as his running mate and choice for lieutenant governor.

He announced his selection at a rally last night in Chicago’s Logan Square.

Biss described his running mate as the grandson of immigrants, the son of educators, and a lifelong Illinoisan.

“As a community organizer, congressional caseworker, and now alderman of Chicago’s 35th Ward, Ramirez-Rosa has worked to put middle class and working families first,” he said.

He said that his new running mate was a congressional caseworker in the office of U.S. Congressman Luis Gutierrez, where he “helped seniors, veterans, and families cut through government red tape as he streamlined the delivery of constituent services.”

In a news release announcing his selection, Biss said that Ramirez-Rosa was the first openly gay Latino elected to the Chicago City Council and that in 2016, he was a delegate for the presidential bid of Sen. Bernie Sanders.