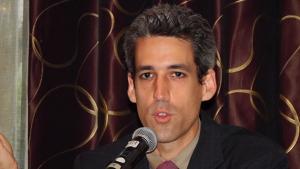 State Sen. Daniel Biss of Evanston says he's optimistic a conference committee will come up with a compromise solution to the state's pension mess in time for it to be adopted in the fall legislative session that starts next week.

Appearing today at a breakfast meeting for local lawmakers sponsored by the Evanston Chamber of Commerce, Biss noted that the house and senate  last spring were working from two radically different reform proposals that they failed to reconcile.

Also at the session, State Rep. Robyn Gabel said she wants to see a pension solution that requires the state to put in the correct amount of money each year, that protects workers 45 years and older from changes in their pension and doesn't cut pensions for low-paid state workers.

Those workers should get cost of living increases at least equal to the annual increases in Social Security benefits.

County Commisisoner Larry Suffredin said it's important not to demonize public employees in discussing pensions, and to keep in mind that the vast majority of them aren't covered by Social Security for their government work.