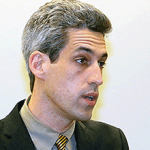 “Current law allows for the creation of street light districts, cemetery maintenance districts and other taxing bodies," Biss said in a statement, "but no way to combine them, even when their own governing boards believe consolidation would provide better value to residents.”

Biss, who has championed local government efficiency measures in the past, said the aim of the new bill "is to remove barriers to consolidation while allowing these decisions to be made locally and openly.”

House Bill 5785 would allow 13 types of local government bodies, from county historical museum districts to tuberculosis sanitarium districts, to consolidate with adjacent districts or be annexed by a city or county.

A majority of the members of the governing board or authority of each governmental unit involved would have to vote in favor of the change during a public meeting. Employees of the district being consolidated or annexed would be transferred to the new authority and would retain all labor and contractual rights.

“No state has more taxing bodies than Illinois,” Biss said. “If government units themselves believe their independent existence is unnecessary and that the taxpayers would be better served by a more efficient arrangement, the state legislature certainly shouldn’t stand in the way.”

The House of Representatives has already approved the legislation, but HB 5785 must return to the House for one more vote before going to the governor’s desk because the Senate added a minor amendment.