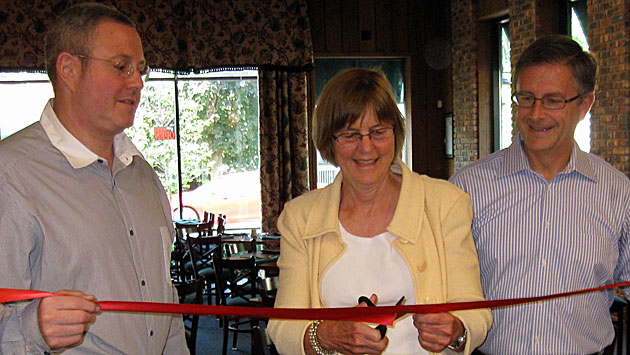 Central Street Café, a bistro-style establishment that sells food, wine, craft beer, and cheese in a restaurant setting, officially opened for business Wednesday. with a ribbon-cutting.

Proprietor Mitchell Dulin, who has operated a number of restaurants in the Chicago area  and formerly managed Binny’s Beverage Depots, lauded Evanston city officials for their cooperation in helping him navigate through the maze of permits and approvals required to open a food establishment.

“Alderman Tendam attended every hearing and was always there when I needed him,” he said.

Dulin, whose wife, Chris, made the draperies that grace the windows of the restaurant, at the corner of Central and Ewing, was awarded a façade improvement program grant from the city to help absorb some of the costs of converting the former movie rental store that previously occupied the space.

The dinner menu contains entrees that range in price from pastas at $8.95 to salmon filets at $14.95 and New York strip steaks at $16.95. An upscale cheese mart and Italian deli complements the wines and craft beers available to take home.

Many of Dulin’s seven fulltime employees live within walking distance of the restaurant, he said.

The café is open every day, except Sunday, for lunch and dinner.  It is now the fourth restaurant to open on Central St. in the block from Ewing to Lincolnwood.