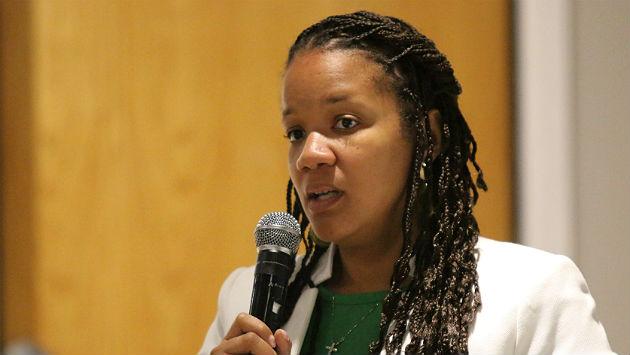 About 40 people gathered at the Gibbs-Morrison Center Thursday evening to offer ideas for how city money might be spent on a “rehabilitative reparations” fund proposed by Alderman Robin Rue Simmons, 5th Ward.

Rue Simmons told the group she believes it could be feasible to provide $1 million a year over the next ten years “to compensate for individual and communal damage left by historical racism and discrimination.”

Some speakers at the meeting, including Bobby Burns of the Evanston Collective, argued that amount was totally inadequate to the scope of the problem.

But Rue Simmons said $1 million was as much as she believed could be allocated within the city’s annual budget, given the city’s other program needs.

She said she hoped to find dedicated funding sources for the program — perhaps from a portion of the additional revenue generated by a recent increase in the real estate transfer tax or a portion of any revenue received from the sale of city property.

And she said she was talking with city staff about creating an option on city water bills that would let residents round their payment up to the nearest $5 and have the extra money go into the reparations fund.

Former 5th Ward Alderman Delores Holmes, who’s now on the city’s Equity and Empowerment Commission and who served as the moderator for the meeting, said she would have preferred to complete the truth and reconciliation educational process that the commission plans to sponsor over the next year before having the discussion about funding reparations.

“We need to do some relationship building and community sharing before getting to that,” Holmes said, “But I’m also flexible.”

“Reparations does not necessarily mean that somebody is going to write a check,” Holmes added. “It could be, but there are all kinds of ways to repair.”

But Rue Simmons responded, “I want to make it real clear that a check is important, in my opinion.”

Carlis Sutton suggested a program that would make home repair grants to low income seniors. He said he knew of at least 25 seniors who are living in homes that are over 100 years old but had only been built to last 30 years.

“Prioritize people who’ve been paying taxes on the same place for over 45 years. They should be the first people to get grants,” Sutton said.

Willie Shaw of the Evanston NAACP suggested beautification work for buildings on Simpson Street and elsewhere on the west side and adding a branch library at the Fleetwood-Jourdain Commnity Center.

Carla Eason, who runs a massage therapy business, said she’d like to see more programs to help entrepreneurs keep their businesses on track.

Another woman suggested creating a fund to provide scholarships to college students who now end up dropping out and coming home after their first or second semester because of a lack of funds.

Another meeting to continue the discussion is scheduled for 9 a.m. Saturday in Room 2402 at the Civic Center.