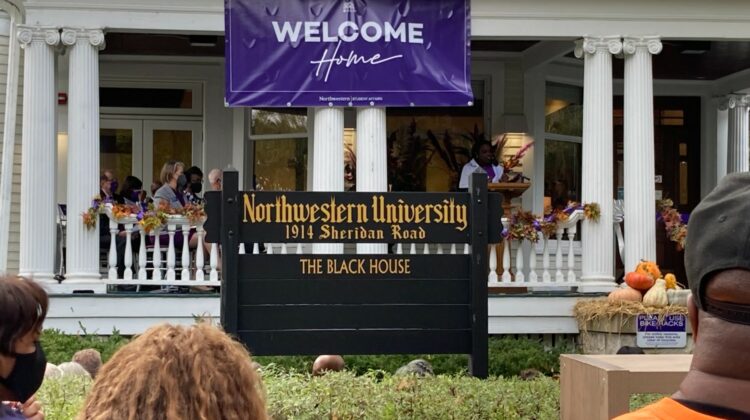 “Black House is back!”

Those four words, spoken to several hundred people gathered for a significant moment, summed up feelings about the rededication of the Black House, the hub of African-American life on the Northwestern University campus.

The man saying those words on Friday, Herman Cage, was a member of what is known as the B100, NU students who, in 1968, occupied the bursar’s office for 38 hours, demanding changes at Northwestern to recognize the needs of Black students.

One of those demands was for what Cage called “a safe, sacred space,” where Black students could meet to share experiences, to study, and to just be with friends.

Said Cage about NU’s agreement to establish the Black House, “This was amazing to me. For the first time, the university would address my fears, loneliness and isolation as a Black student. Now we had our own space.”

The house itself, on Sheridan Road, was renovated over the past two years.

The rededication attracted current students, as well as alumni who recalled what the Black House meant to them.

Veronica Hancock (Class of 1991) said she “used to come here to study and socialize.”

There were only 600 Black students on campus then, Hancock said. “To me,” she added, “Black House was a community where I felt at home.”

Today the school has nearly 1,200 Black students, but that’s only about 6% of all the school’s students. So, with Black students still making up only a small percentage of NU’s campus population, Hancock said, “Now more than ever, the importance of this place has increased.”

Sloane Harris, a senior who is double majoring in biology and global health, said, “Often, being in classrooms which are majority white can be tough.” At the Black House, Harris said, “I feel instant support.”

Julia Wallace of Evanston, a senior majoring in journalism, echoed what Herman Cage, who is 50 years older, said at the event.

To Wallace, Black House is “a physical manifestation of a safe place, a dedicated space, a sense of community.”

And while Herman Cage looked back at the events which led to the creation of the Black House, he also combined that with a look ahead.

Black House, he said, is “our legacy to future generations.”