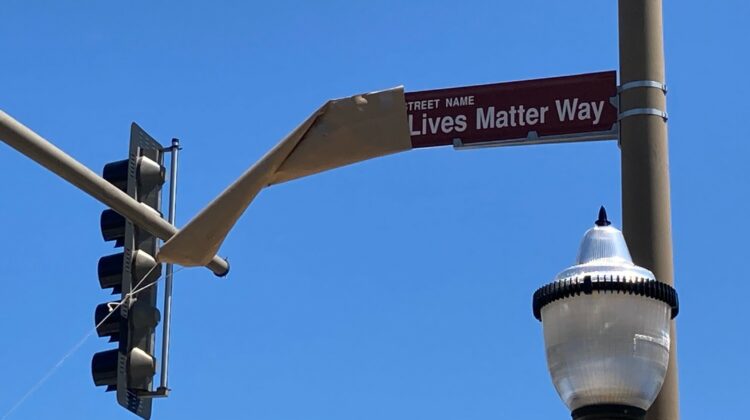 This time, it won’t wash away.

Spencer George, a basketball player who will be a sophomore when school starts on Monday, said “last year, with all the injustices going on,” painting “Black Lives Matter” on the street “was a good way to gather the team and speak out and let the community know how the team felt.”

But those big yellow letters faded under the combination of weather and traffic.

Today, a weather-proof and traffic-proof solution was unveiled … a sign far up on a pole declaring Dodge Avenue between Church and Lake Streets, in front of ETHS, as Honorary “Black Lives Matter Way.”

Basketball players tugged on a string, which pulled off a cover from the sign, as about 100 onlookers cheered.

Ald. Peter Braithwaite (2nd) organized the event on behalf of the City.

ETHS principal Marcus Campbell told those on hand that the high school “stands in solidarity with racial justice in Evanston.”

And District 202 Superintendent Eric Witherspoon said that the concept of black lives mattering is “embedded in the mission and the goals of Evanston Township High School. We believe it, we live it, we embrace it.”

Basketball coach Mike Ellis, who led the team’s painting last summer, said “I can teach them to shoot a ball into a basket, but nothing is as important as what they put on the street.”

Now, that message is above the street, safe from snow, rain, cars, and trucks.

Incoming senior basketball player Jack Tully put it this way: “It’s important. The sign will stay there now no matter how many cars drive by. It will always be there so people can see it.”