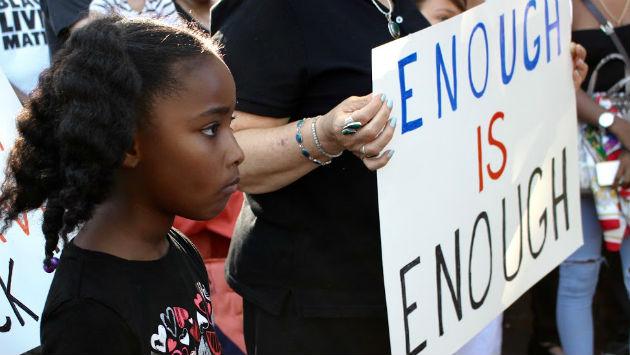 The few hundred protesters condemned police brutality after the shooting deaths of two black men in Louisiana and Minnesota earlier in the week.

Organizer Camille Allen, 18, reached out to a friend after watching videos of the shootings and debated holding a vigil or protest.

“We decided ultimately that while there was a time to mourn their deaths, there could also be a time to call for action and call for change,” Allen said. “I don’t think activism is one set solution or one set plan. We have to be active, whatever that means to us.”

The rally’s demographic varied, from young children to the elderly, and included people of diverse racial and religious backgrounds. Both a rabbi and a pastor spoke about how they want the community to unite, not divide, during this controversial time.

After Nabors addressed the crowd, ETHS student Liana Wallace, 15, performed a spoken-word poem she wrote the day before. Wallace voiced her frustration about the recent killings, but said violence was not the answer. She called on legislators to combat institutionalized racism.

“I demand a tomorrow where a white police officer cannot feel so threatened by my skin as to shoot at the very sight at me, and I demand that we start working on this tomorrow today,” Wallace said. “I don’t want to protest for the rest of my life. I want something to change.”

Wallace is on the board of Students Organized Against Racism, a group committed to combating prejudice at ETHS. Members used social media to promote Evanston Against Police Brutality.

“These protests are really important because they build community and you see the people who care,” Wallace said. “You could be sitting in your room looking on Facebook the entire day and you’re really depressed, and then you come here and there’s a community of people who are hurting and struggling with you so you don’t feel so alone.”

After the demonstration, rally leaders moved into the crowd and spoke with attendees, many of whom were crying and hugging each other. Nabors said he used his experience as a minister at Second Baptist, Evanston’s first black Baptist congregation, to cope with his own grief and indignation after the shootings.

“You have to try to grasp your emotions and get them under control. Your voice is going to be one of the few that will be heard by hundreds of people,” Nabors said. “How do you move from an emotional moment like a rally into something that’s substantive? We may not be able to change the world, but you can bet your bottom dollar that we will change Evanston.”