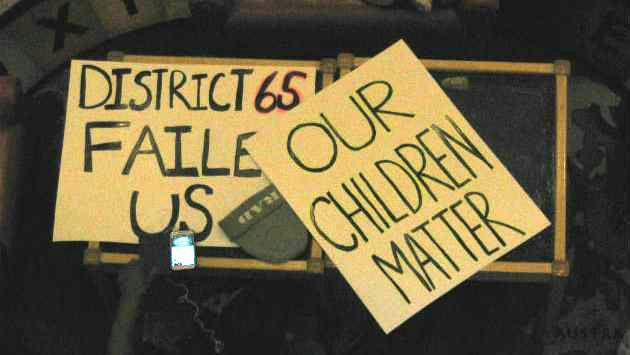 Although only about a dozen black parents showed up at Evanston/Skokie School District 65 headquarters at 6 p.m. Monday for what was billed as a “silent protest,” by the time the district’s monthly board meeting began at 7 p.m., there was standing room only in the large board room.

The audience stayed through the end of the public-comment period nearly two hours later, as 17 of them addressed a sympathetic board with pleas to fix the perennial gap in academic achievement that persists between students of color and their white fellow students.

Before the comments even began, Board President Tracy Quattrocki assured them that every member of the board recognized the achievement gap as “the biggest challenge facing the district.”

Superintendent Paul Goren said he welcomed “an open dialog on achievement” and added: “We are here to listen, to learn, and to act.”

Most of the audience was already aware of results released last week by the Illinois State Board of Education of testing last spring by the new Partnership for Assessment of Readiness for College and Careers (PARCC) that indicated that some 49 percent of District 65 students scored as proficient in English, but 70 percent of the white students were rated proficient, compared with only 20 percent of the black students.

So while the white students beat the state averages by wide margins, the black students fell short on both tests.

So what did the black parents suggest? Without saying so explicitly, many of them questioned the wisdom of busing black students to schools in predominantly white residential areas, as they felt that black students learn better when taught by black teachers.

“It is important to have male black teachers in the classroom,” declared a male 1991 graduate of Evanston Township High School.

A former black teacher at Haven Middle School asserted that many white teachers do not know how to teach black students.

And a mother of a student at Willard Elementary School noted that her daughter was the only black student in the Two Way Immersion program designed to help Hispanic and native English students learn the language spoken by the other group.

A parent at Lincolnwood Elementary School and Haven Middle School complained that the district “tried to label my student as having a  learning disability” that she contended he did not have.

She added that black parents need to become more involved with their children’s schools.

A mother of three and grandmother of seven complained that the school system “set my children up to fail.”

A black minister who came to Evanston recently from Detroit said he considers the gap to be a structural problem. “We need to make a commitment that we will do whatever it takes to bridge this gap,” he declared, and acknowledged that the black community bears a responsibility to bring kids to the district “that are ready to succeed.”

Following the public comments, Superintendent Goren said that he and the board are committed to working  with the parents, and added: “You’ve been encouraging us to think about a cultural change in this community.”

But board member Candance Chow warned that change will not come overnight. “We can’t be looking for some magic bullet that doesn’t exist,” she said.

D65 girds for stormy board meeting