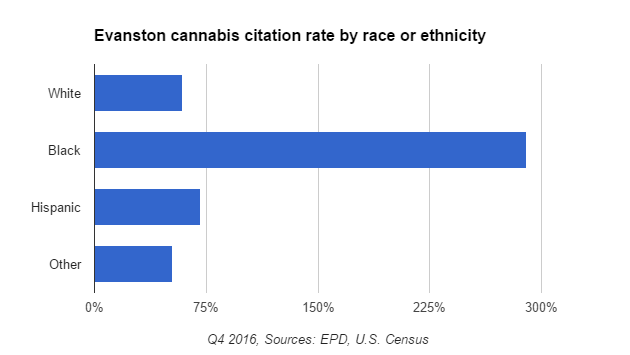 In comparison with their share of the population, blacks in Evanston are nearly five times more likely than whites to be cited for possession of small quantities of cannabis.

Statistics for the fourth quarter of 2016, to be presented at Monday night’s City Council Human Services Committee meeting, show that blacks, who make up 17.6 percent of the city’s population, were issued 51.1 percent of the citations for possession of less than 10 grams of cannabis.

The population percentatives are based on figures from the 2010 U.S. Census.

There are similar large disparities in cannabis citations by gender, with females receiving just 17 percent of citations, compared to 83 percent for males.

Cannabis citations are issued in the largest numbers in city wards that have a substantial minority population. 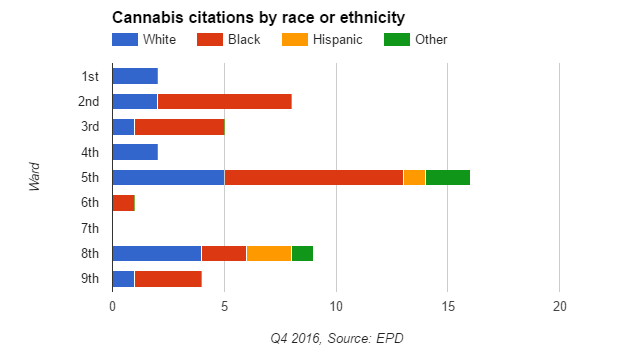 Police Chief Richard Eddington has said that cannabis arrests tend to take place where people congregate on the street and where police receive complaints from neighbors about drug dealing, and that both of those things tends to happen most often in low-income neighborhoods.

And the citations are most often issued to young adults, with more than half of the 47 citations issued in the fourth quarter going to people between 21 and 30 years of age. 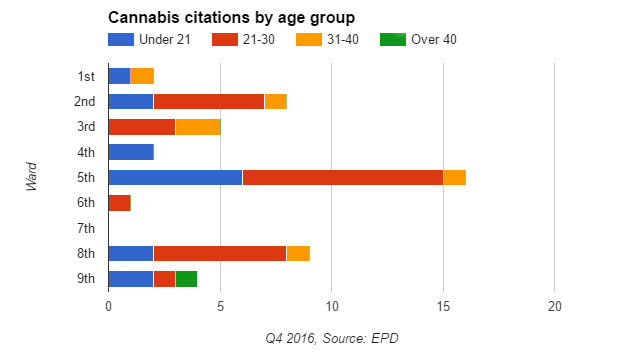 In 2011 the City Council approved a plan to reduce penalties for possession of small amounts of marijuana by shifting to issuing citations that are heard in the city’s administrative adjudication process, rather than misdemeanor violations heard in criminal court in Skokie.

Previously nearly 60 percent of the arrests for small quantities of cannabis possession were handled through the criminal court.

During the fourth quarter of 2016, Police Cmdr. Jody Wright says, only two cases of possession of less than 10 grams of cannabis led to charges in criminal court and those were for additional offenses arising from the same arrest.