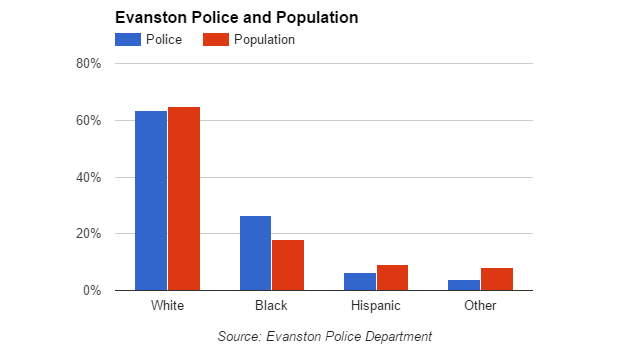 A new report to be presented at tonight's Human Services Committee meeting says that — unlike the case in many other communities — blacks are not under-represented on Evanston's police force.

The report, prepared by the Police Department, says 64 percent of Evanston police officers are white, compared to 65 percent of the city's population.

Blacks are slightly over-represented on the police force at 26 percent, compared to 18 percent of the city's population.

The city police demographic figures don't align completely with U.S. Census Bureau figures for the city's overall population, because the police department figures treat Hispanics as a racial category, while the census treats it as an ethnic category distinct from race.

Recent studies by the Brookings Institution and Governing magazine have highlighted the substantial under-representation of blacks on many police forces in communities large and small across the country, and those disparities have been seen as a factor in recent police shooting incidents as well as widespread distrust of police in minority communities.