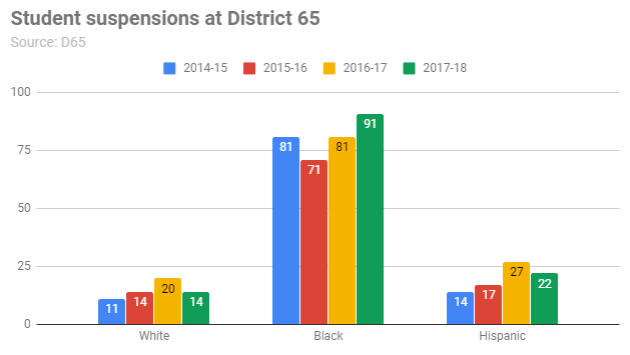 Suspensions in Evanston District 65 schools still disproportionately affect black students and students with disabilities according to an administration report to the school board Monday night.

The number of alternative-to-suspension incidents, which involve counselling sessions for students and family members, increased from 70 to 71.

Office Discipline Referrals are used to address inappropriate or negative student behaviors that “are persistent or of major significance.” The report indicates increases in the percent of both white and black students with major ODRs and decreases for multiracial students and students with disabilities.

As for the types of incidents that result in suspension, causes related to drugs or alcohol, physical violence and disrespectful, aggressive or threatening behavior decreased while incidents for theft or vandalism increased.

A separate report indicated that out-of-school suspensions for the first quarter of the current year (through Sep. 30), is significantly smaller than last year (reduced from 12 to 5) but is still higher than the previous year.

In introducing the report, Andalib Khelghati, assistant superintendent, noted that the data represented the suspension of 115 students out of a population of over 7,900 students.

“However, this data shows a gross overrepresentation of black students and that should not be the case,” he said.

During a discussion earlier in the meeting about racist language among students at Lincolnwood Elementary, Anya Tanyavutti, vice president of the school board, asked if the administration kept track of incidents in which students used exclusionary, racial or hurtful language.

“We need a systematic way to track racist language as part of discipline categories,” she said. “Does the category ‘disrespectful, aggressive or threatening behavior’ include racist language?”

Khelghati explained the “disrespectful, aggressive or threatening behavior” suspension category is more complex than just language. “It concerns not following directions related to safety,” he said, while agreeing that the administration needs better definitions.

Board member Candance Chow noted that suspensions for students with IEPs outside of Rice school has nearly doubled since 2015. “How do we know if there’s a connection between the disability and the behavior so we can make sure it’s not exclusionary?”

Board members requested that the data for suspension incident type and for students with IEPs be disaggregated by race so patterns can be identified.

Tanyavutti also wondered about gender. “Are boys being over disciplined?”

“Compared to other districts, we’re on the cutting edge of equity work,” said Superintendent Paul Goren. “We’re shifting the mindset of adults who work in the system. We used to have a tool called suspension. Now we have a tool that’s restorative.”