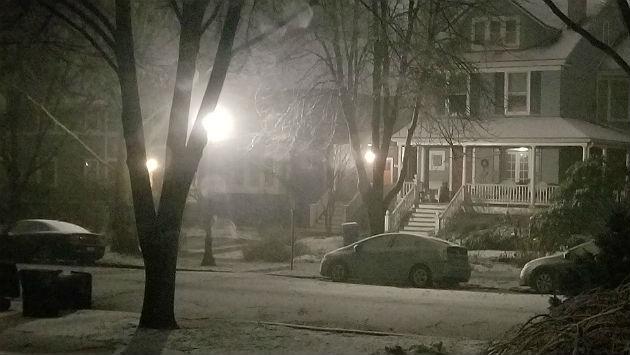 Update 5:45 a.m.: The blizzard that was forecast to hit Evanston overnight delivered plenty of high winds, but much less snow than initially expected.

The National Weather Service cancelled the blizzard warning it had issued Sunday shortly before 3:30 a.m. today but still has a winter storm warning in effect for Evanston until 9 a.m.

Near dawn it appeared that Evanston had received perhaps an inch of snow along with considerable rain, which may have made roads and sidewalks very slippery.

City crews are out plowing and salting the roads.

The storm had been forecast to deliver 4 to 8 inches of snow, but fell far short of that.

Districts 65 and 202 schools will reopen today, after the Thanksgiving holiday. District 65 issued a message overnight confirming that schools will be open and encouraging students to “dress warmly.”

The weather service is still warning that travel may be difficult and cautions that the snow from the storm is expected to be very heavy and difficult to shovel.

Update 6:25 a.m.: ComEd is reporting more than 1,000 customers in Evanston without power at this hour. The largest of the outages are reported near Florence Avenue and Dempster Street and near Lake Street and Elmwood Avenue.