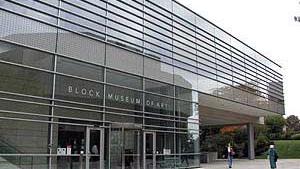 Northwestern University’s Block Museum of Art will be closed from now through the fall to make repairs on its sprinkler system.

The museum suffered water damage to its main gallery last week when a pipe connected to its fire suppression system burst.

Officials say the museum's art collection was not damaged, and water in the system has been turned off temporarily and the art collection has been moved to an off-site storage area.

The museum's auditorium is expected to remain open for Block Cinema films and lectures and for use by Northwestern classes throughout the fall. The museum will reopen in January.

The “Steichen/Warhol: Picturing Fame” exhibition, drawn from two major gifts of art from Richard and Jackie Hollander and the Andy Warhol Foundation for the Visual Arts, has been rescheduled for January and will run through early April. “The Polaroid Years: Instant Photography and Experimentation,” on loan from Vassar College’s Frances Lehman Loeb Art Center, has been cancelled.

Lisa Graziose Corrin, the museum's director, said that while the closure is disappointing, the museum will have "a vibrant, redesigned lobby" when it reopens.

The lobby redesign, already in the works when the sprinkler system failed, was designed by James Geier of Chicago’s 555 International.