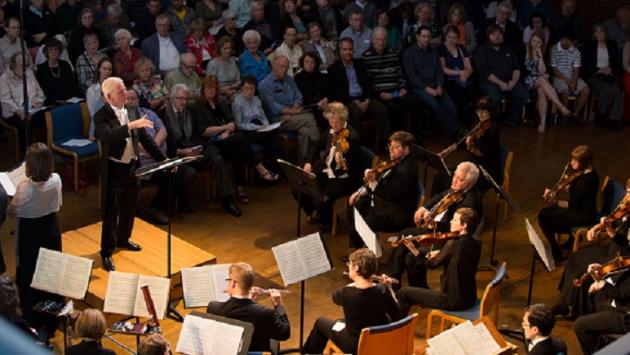 The 42nd annual edition of the Chicago area’s Bach Week Festival will feature all six of J.S. Bach’s beloved “Brandenburg” Concertos, performed in the course of concerts April 10 at Nichols Concert Hall in Evanston and May 1 and 3 at Anderson Chapel at North Park University on Chicago’s North Side.

The festival is a collaboration between Bach Week and North Park’s School of Music.

This will be the first Bach Week Festival to present the complete “Brandenburg” Concerto cycle. Two of the concertos will anchor each principal concert program, alongside other Bach compositions.

An intimate, late-evening Candlelight Concert in Evanston on April 10 will offer music for recorder and theorbo, another festival first.

The festival opted not to program all six concertos in a single concert, as was recently done by other ensembles who gave Chicago performances of the complete set.

“Taking a marathon approach to these vigorous, inventive, and virtuosic works can test the stamina of concertgoers and musicians alike,” says Richard Webster, who helped organize first Bach Week Festival in 1974 and has been music director since 1975.

“In true festival fashion, we always aim for a stimulating range of musical colors, textures, and ensemble forces in each program,” Webster says. “Invigorating variety and high-octane artistry are what make the Bach Week Festival so festive.”

The May 1 concert will have a 20th-century twist: it will include Igor Stravinsky’s Bach-inspired “Dumbarton Oaks” Concerto, which shares themes with the “Brandenburg” Concerto No. 3, also part of the evening’s program. This will be the festival’s first pairing of those two works since the early 1990s.

The 2015 festival will also see the long-awaited returns of revered artists such as trumpeter Barbara Butler, music professor at Rice University, whose credits include Music of the Baroque, Eastman Brass, and the Grant Park Orchestra; and horn player Gail Williams, music professor at Northwestern University, original member of the Summit Brass, and former associate principal horn with the Chicago Symphony Orchestra.

At 10 p.m., following the season-opener concert, Mirja Lorenz, recorder, and Joel Spears, theorbo, will perform a Candlelight Concert in the Nichols Hall lobby. The theorbo is a large, long-necked lute, a pear-shaped predecessor of the modern guitar.

Concertgoers can partake of complimentary champagne and fine chocolates.

The festival will head to Chicago in early May for a two-concert series at North Park University’s Anderson Chapel, 5149 N. Spaulding Ave.

The notoriously difficult French horn parts in the First "Brandenburg" and “Dumbarton Oaks” will be handled by Gail Williams and her former student Adam Unsworth, a University of Michigan instructor who has played with the Detroit Symphony and Philadelphia Orchestras.

The concert will conclude with Bach’s Mass in F Major, BWV 233.

Bach Week is one of the Midwest’s premiere Baroque music festivals. The event enlists musicians from the Chicago Symphony Orchestra, Lyric Opera of Chicago Orchestra, and other top-tier ensembles, while featuring some of the Chicago area’s finest instrumental and vocal soloists and distinguished guest artists from out of town.

The 2015 Bach Week Festival is supported in part by the Elizabeth F. Cheney Foundation for the “Brandenburg” Concertos cycle, The MacArthur Fund for Arts & Culture at the Richard H. Driehaus Foundation, and the Illinois Arts Council Agency, a state agency.