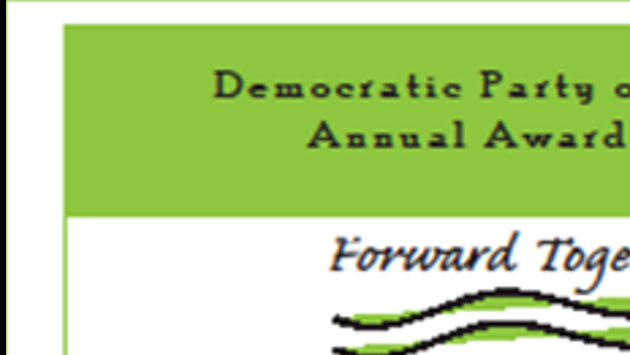 It is not too late to join fellow Democrats and our great legislators for 2014 Democratic Party of Evanston Annual Dinner , “Forward Together,” to be held on Sunday, October 19. The event will highlight David Axelrod, currently Director of the Institute of Politics at the University of Chicago and formerly top advisor to Presidents Clinton and Obama, who will receive the Yellow Dog Award for providing political acumen and wise counsel to the Democratic Party. Robert Creamer, political strategist on national issue campaigns and author of Stand Up Straight: How Progressives Can Win, will receive the Abner Mikva Award for defending progressive values and encouraging early political involvement. Bernice Weissbourd, founder of Family Focus, will receive the Community Achievement Award for her commitment to strengthening families and Jane Neumann and Joanne Zolomij, DPOE Board members, will receive the Ted L. Loda Volunteer Award for outstanding service.  Presenters are expected to include Jan Schakowsky, US Representative; Daniel Biss, Illinois State Senator; and Robyn Gabel and Laura Fine, Illinois State Representatives. Larry Suffredin, Cook County Commissioner. The festivities are at the Unitarian Universalist Church, 1330 Ridge Avenue, in Evanston, beginning at 5:00pm.

Because last year’s event was a sell-out, members and friends should join the race now to move forward together by going to www.dpoe.org to register for the event. Individual tickets are $125 and sponsorships are available for:

Dinner proceeds, along with DPOE membership, help to fund the efforts of the DPOE to assist local as well as national Democratic candidates and to support progressive legislation. The DPOE receives no funds from the Democratic National Committee or other Democratic organizations.

Grerat food from some of our finest and new local restaurants including Found, Boltwood, Mumbai Grill, Mediterranean Grill, Everest and Hecky's