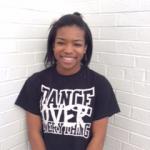 Brillianteen introduces high school juniors and seniors to the experience of live theatre, allowing them to develop leadership and team-working skills, boost their confidence, and gain a greater sense of community. In the YMCA’s spirit of inclusion, every student who auditions is invited to participate.

We'll be profiling some Guys and Dolls cast members, starting with Alia!

Brillianteen role: Sarah Brown, the straight-laced missionary whose efforts to save souls in New York City leads her into the arms of a gambler named Sky.

Best part of being cast as Sarah: I found out I could sing!

Hardest part: Pretending to be such a conservative and serious person who never dances.

What keeps me busy: Dancing!

Interesting fact: Alia has studied theatre in school and used to make short videos for YouTube, but this is her first time in a musical.

What’s new about Brillianteen: I remember seeing previous productions and there was very little diversity, but this year, there’s all different kinds of people involved.