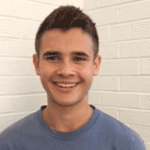 On March 6-8, McGaw YMCA's Brillianteen will present its 63rd annual student-produced musical, Guys and Dolls. With almost 150 high school juniors and seniors involved in the production, you’ll be sure to see someone you know!

Brillianteen introduces high school juniors and seniors to the experience of live theatre, allowing them to develop leadership and team-working skills, boost their confidence, and gain a greater sense of community. In the YMCA’s spirit of inclusion, every student who auditions is invited to participate.

We're profiling some Guys and Dolls cast members – next up, Ben!

Brillianteen role: Sky Masterson, a gambler willing to bet on almost anything, including winning over the uptight missionary Sarah Brown.

On playing Sky: He’s got a sophisticated demeanor and the musical is set in a cool time, with gentlemen and dice, real old-timey.

Brillianteen fan since: 2010, when his parents took him to see Joseph and the Amazing Technicolor Dreamcoat. Ben was in the ensemble in last year’s Footloose.

Best part of acting: Everything that goes into theatre that people don’t think about. Like the way a character is driven, what he wants from the scene and the emotions behind it.

What makes Brillianteen unique: It’s a fun environment and when things are being productive and I’m collaborating with my peers, that’s really cool.

Why see Guys and Dolls: There are really funny parts. People are going to laugh.