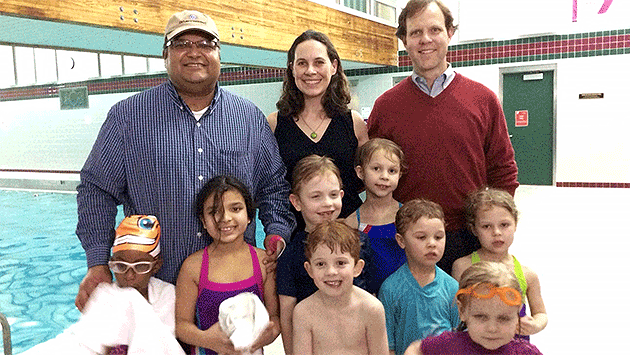 When Dr. Ann Borders and her husband, attorney Will Borders, first moved to Evanston, they asked around about swim lessons for their children. Following a scare with a different child who had fallen into a pool, the Borders knew it was time to give their kids the skills necessary to be safe, and have fun, around water.

Little did they know that almost four years later, the Borders family (including baby #3, Alex) would still dedicate their Tuesday evenings to swim lessons at McGaw.

McGaw YMCA’s central location, not to mention the variety of times available for group swim lessons, was ideal for the Borders.

“Most activities for kids happen during the day, but we got to participate in this,” Ann said. “We’d meet here coming from work, and this became where we always spent our Tuesday nights.”

Though not members, the Borders said they quickly came to appreciate the welcoming, community feel of McGaw YMCA. It’s a place where staff understands that families sometimes run late or a child may need extra time mustering courage.

Ann remembers one time when at least two of her three children were having tantrums, and they arrived on the pool deck for just the last 10 minutes of class.

“And the teachers were like, ‘Yay, you’re here!’  They make it feel like a fun, happy swimming family,” she said.

“We love the staff, and that’s partly why we keep coming back,” added William.

Ann said she is routinely impressed with small class sizes, and the way the swim instructors engage her children.

“My kids always have a good experience,” she said, which makes it pleasant for the parents too.

Beyond instilling a love of swimming in their three children, the Borders’ Tuesday night ritual has broadened their community. In particular, they have spent many evenings on the observation deck becoming friends with Michael Peter, who has brought his 8-year-old daughter and his 6-year-old niece and nephew for about four years as well.

Michael said he appreciates taking the children to a warm pool because “the kids don’t dread going in the water.” Plus, though the instructors are kind and playful, he said, they take their jobs seriously, emphasizing water safety for all ages.

Recently, Michael was watching the swim lessons below and he spotted a strong swimmer who was doing an excellent job with her strokes. And then he realized it was his own daughter, Maisy: “She was amazing!”

The ‘Tuesday Night Crew’ plans to continue their group swim class ritual for as long as they can, enjoying the time together as part of the McGaw YMCA family.