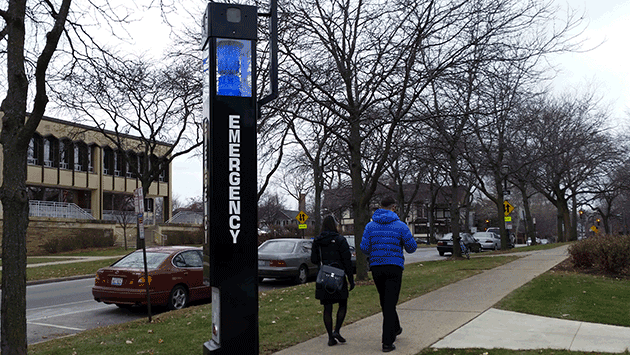 Proposals to add more blue light security phones near the Northwestern University campus are prompting a discussion of whether the phones actually make the area safer.

Plans to add phones at Tallmadge Park on Colfax Street east of Ridge Avenue and at the intersection of Haven Street and Orrington Avenue are scheduled to be discussed at an NU/City Committee meeting Wednesday evening.

Alderman Judy Fiske told residents at her 1st Ward meeting earlier this week that she'd asked Police Chief Richard Eddington for a report on the number of emergency calls placed from blue light phones over the past four years and that he told her there'd been "less than five of any consequence."

"Police have to respond to each one of them anyway," Fiske said, "Even if somebody walking by just presses the button and walks on."

"Of the real calls," Fiske said, "One was from Fireman's Park and two were at the Davis Street CTA station."

Jeanne Lindwall, of 625 Library Place, said that living in the neighborhood she finds the phones "really intrusive."

"Their lights are pretty bright when you're trying to sleep," she added.

Barbara Janes, of 802 Colfax St., cited news reports that students at the University of Colorado are urging removal of blue light phones, calling them expensive and obsolete — given that most students now carry cell phones with them around campus.

Kevin Harris, vice president for community relations of NU''s Associated Student Government, said Northwestern is considering providing students with an app for their mobile phones that would provide a "panic button" that could be used to quickly call police.

But he said officials at the university police department have expressed concerns about the app solution, because while essentially all students have cell phones, not all of them have the smart phones that could use the new apps.

"You'll find blue lights on every single college campus," Harris said, "It does make a difference for students in feeling safe coming home at night."