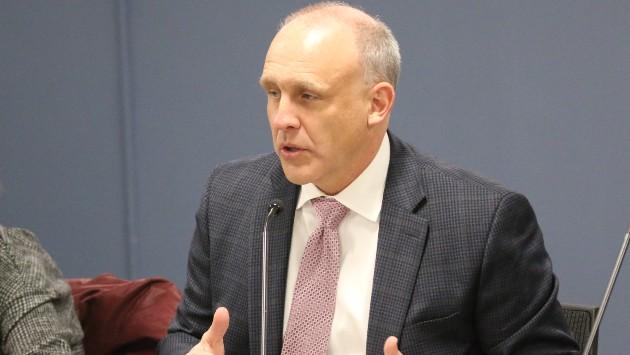 Evanston’s Electoral Board voted 2-1 this evening to remove the voter initiative petition drive from the March election ballot, but former Gov. Pat Quinn, representing the referendum supporters, vowed to appeal the decision to the courts.

Mayor Steve Hagerty and Alderman Ann Rainey, 8th Ward, voted to uphold both objections to the referendum — that it violates a provision of state law that says voter-initiated referendums on local government issues can only be advisory and that the language of the referendum question is confusing.

Quinn, who argues that voter-initiated binding referendums are legal under state law, failed to persuade the board of that position. He also lost his effort to have the objection dismissed on the theory that the objectors had failed to state an “interest” in the issue as required by state law.

The objectors argued that their statement that they are Evanston residents and registered voters was sufficient to demonstrate their interest in the matter.

The board split 2-1 on that issue as well, with Hagerty and Rainey siding with the objectors.

Grace period voting for the March 17 election starts Feb. 19, so there is only limited time for an appeal to Circuit Court to be heard.