Evanston Plan Commissioners voted unanimously Wednesday to approve the new master plan for the Central Street corridor and send it to the City Council’s Planning and Development Committee for further review. 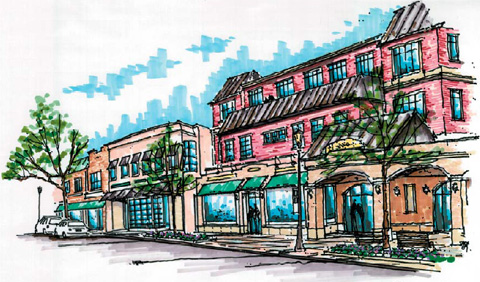 A rendering of an imagined commercial streetscape from the master plan document.

The approval came despite complaints from several neighborhood activists that the plan does not go far enough in downzoning the area to prevent new development they dislike.

"This is not an area crying out for development," Jeff Smith, president of the Central Street Neighbors Association, said, "Central Street is a viable, working, functional neighborhood. It’s not broke. Don’t fix it. To sustain and enhance the neighborhood we need downzoning."

"Those who would like to redevelop the area are circling like sharks," he added, "There’s lots of money to be made, but not for the benefit of the neighborhood."

He said the average height of buildings along Central Street now is just 20 feet, and he’d like to see it stay that way.

Several commissioners challenged Mr. Smith’s dire predictions, noting that much new development along Central has fallen far short of existing height limits and suggesting that the continued presence of many older, low-rise buildings in the area indicates that there are fewer developers circling than he imagines.

Richard Wright of 2603 Hartzell St. echoed Mr. Smith’s concerns and suggested the area should be downzoned to permit a maximum of two stories.

The plan calls for maintaining existing height limits in some zones, but reducing limits in others.

It also call for maintaining the existing 45 foot limit in B2 business and C1 and C2 commercial zones, but adding a rule limiting buildings in those zones to no more than four stories.

The plan calls for streetscape improvements that the consultants’ report estimates would cost $1,417 per lineal foot. Given the opposition of residents to substantial new development, it appears there will be little opportunity to tap developers to fund those changes — the approach used to fund streetscape improvements along Chicago Avenue in South Evanston.

That would leave taxpayers footing a nearly $20 million bill if the improvements were applied to the full length of Central and the short stretch of Green Bay Road included in the study.

Planning Director Dennis Marino said it was important to approve the streetscape proposal immediately so that it could be included in this year’s capital improvement program funding process, which takes place over the summer.

He proposed, and the commissioners agreed, to refer the plans rezoning proposals to the commission’s zoning committee for further discussion.

Commissioner Albert Hunter won support for his proposal that the plan be amended to place more emphasis on developing the several parks along Central Street to be more than just grass and trees and have a variety of different uses.

The draft plan had focused attention almost exclusively on Independence Park in the heart of the business district just west of Green Bay Road.

The plan also calls for redesigning the Stewart Avenue parking lot adjacent to Independence Park, for exploring the feasibility of a parking structure on the open parking lot just west of Ryan Field and seeking funding to improve and reconstruct the CTA and Metra viaducts on Central Street.

Attorney James Murray, representing the owners of two businesses at Crawford Avenue and Gross Point Road, said that increased setbacks and other changes called for by the plan would make it nearly impossible for the properties to be redeveloped.

"Both of these are family-owned businesses," Mr. Murray said, "and the properties represent a substantial part of the assets the owners are counting on as part of their retirement plans."

"It’s a wonderful plan," he added, "but there are costs associated with it, and individual property owners are not in a position to bear the expenses."

Copies of the Central Street plan and other documents related to it are available on the city’s web site.