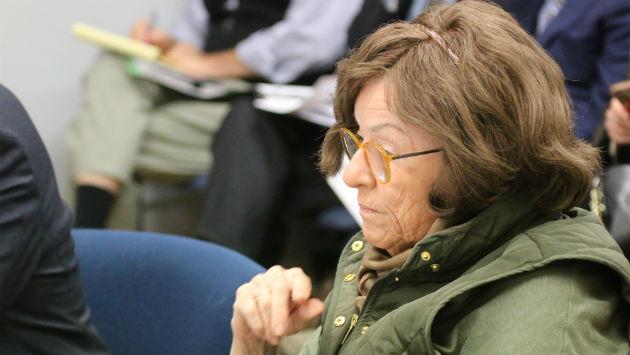 Evanston’s Board of Ethics dismissed several allegations of improper conduct brought against Alderman Ann Rainey, 8th Ward, by opponents of her views on the Harley Clarke mansion, but concluded she’d used inappropriate language that gave an appearance of a conflict of interest and lack of impartiality.

In a five-hour meeting that ended early Friday morning, the board struggled with the reality that the ethics code they’re charged with enforcing has no provision demanding civility in discussion of public issues.

Instead they focused on a requirement stating that “Every officer and employee” of the city “shall perform his/her duties with impartiality and without prejudice or bias for the benefit of all citizens of the city.”

At some points during the board’s debate, its members acknowledged that impartiality means something different for a city staff member charged with administering policy than for an alderman whose role is to vote on what the policies should be and who logically must be able to advocate for his or her own policy positions.

But they ultimately used Rainey’s advocacy of a policy position combined with her choice of language to find violations of the code.

Regarding a complaint brought by Nancy Sreenan, the board concluded that Rainey:

Ethics Board member L.J. Ellul listens to testimony during the hearing.

A second complaint, filed by Lori Keenan and Clare Kelly, sought to use Rainey’s behavior as a rationale to void the City Council’s 7-2 vote to move toward demolition of the mansion. Kelly’s attorney Jeff Smith, known for his unsuccessful effort to have all his competitors in the mayor’s race kicked off the balot last year, also unsuccessfully sought to claim that Rainey had violated state criminal laws by raising funds for the group seeking to pay for the demolition.

Board Chair Jennifer Billingsley suggested that recusing herself from future votes on the mansion issue would be an appropriate way for Rainey to address the violations.

The board is scheduled to formally adopt its recommendations at its next meeting on Nov. 20.

The board ruling, which is advisory, will then go the the City Council Rules Committee for further consideration.