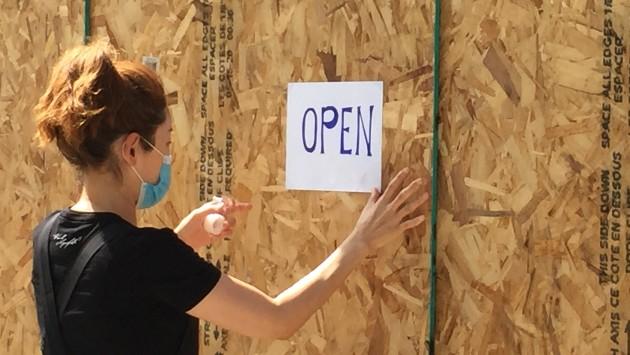 Katie Ra taped up a hand-made sign this morning which said “Open.” That sign was probably the only way potential customers could know the manicurist’s business, Bien Assorti, was indeed still in business, because the windows had been boarded up.

The merchants themselves had nothing to do with the plywood which now blocks views in and out. Employees at Newport and at Koi both told Evanston Now it was the decision of the landlord who owns all three properties.

The barista at Newport, Jennifer Short, says “it was not our call.” The boards, she says, are a “precautionary thing,” due to looting around the nation following protests over the police-involved death of George Floyd in Minneapolis. The only looting in Evanston so far has been at a Best Buy on Howard Street, several miles from downtown.

But while the boards may be a precaution against looting, they don’t help businesses which are still reeling from coronavirus-related shutdowns. Short says Newport is leaving its door open so people can see they’re still open. Plus, they’ve put some tables on the sidewalk.

At least Newport and Koi have been able to sell takeout during the shutdown. But Bien Assorti was only open two days before the boards went up. The nail salon had been closed for three months. Salons and other similar businesses can now reopen with limits on customer numbers under Gov. J.B. Pritzker’s Reopen Illinois plan. Still, Katie Ra says the protests she’s seen on the news can turn “scary,” so she’s hoping for the best.

Target was the first downtown Evanston store to board up, earlier this week. Target did the same thing to 175 stores nationwide, in or near areas like Chicago which have seen disturbances. The downtown Target was closed for one day but then reopened.

Across the street, the MedMen marijuana dispensary also sports floor to ceiling plywood. There is no sign indicating anything, however, an online publication called Marijuana Moment says MedMen has temporarily closed all of its locations because of looting at several of their Los Angeles stores.

Evanston Now has tried to contact the various parent companies or property owners, but we have not heard back.

Paul Zalmezak, the city’s economic development manager, says the property owners reported the boarding-up ”was done under an abundance of precaution.  There have been no reported threats of coordinated robberies at these locations.”

“I am hopeful,” he adds, “that this is a very short term means of securing the property and have reported my concerns to the property owners.”

Annie Coakley, of Downtown Evanston, the agency which promotes the central business district, says she would not be surprised if the boards were put up based on insurance company suggestions. Coakley says the Evanston Police Department is closely monitoring surrounding areas, and “according to their social media feeds downtown Evanston is not a target.

As for the workers impacted by the boards going up, Jennifer Short had some thoughts while pouring coffee for a customer at Newport.  “We’re rolling with the punches,” she said. Things like boarded up windows are “inevitable, I guess, in the current temperature.”