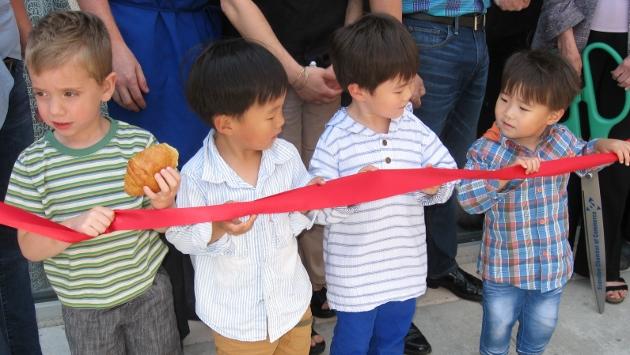 Why does the new Boltwood Restaurant’s name sound so familiar? Just ask any graduate of Evanston Township High School. Yet the Boltwood bears scant resemblance to the cafeteria of the same name at ETHS.

Chef Brian Huston, a 1989 ETHS graduate, explains that Boltwood was the name of the freshman wing at the high school when he was a student there, and it provides a philosophical link to the new restaurant.

To ETHS graduates, he explains, “Boltwood represents that start of a new journey, a place where new experiences happen, a place that feels alive with energy and enthusiasm, and a place where relationships are built.” 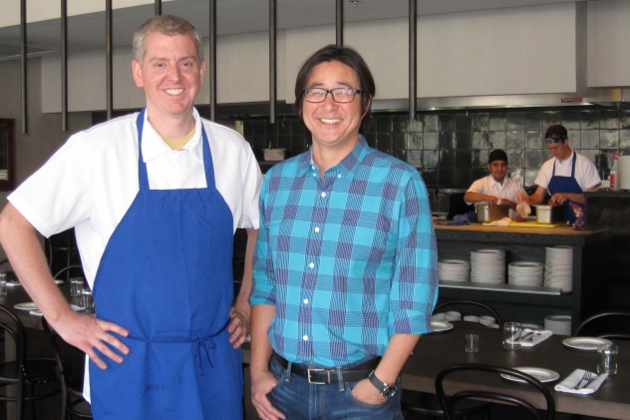 Owners Huston and Kim against the butcher block background that serves as the hub of activity.

Located at the site of the former Lulu’s Restaurant adjacent to the Optima Towers at Davis Street and Sherman Avenue, the restaurant opened for dinner two weeks ago and plans to open for lunch as well in the fall.

Like many new restaurants in Evanston, the Boltwood salutes the Midwestern farmer and ingredients grown close by and served while they are still fresh and hearty.

“The farmers and the market will dictate the menu more so than any particular style or ethnicity,” says Huston.

“I want the menu to change often and reflect the same diversity as the community around us. We will be just as likely to serve a comforting lamb curry or a house made soba noodle as we will a bouillabaisse or a summer tomato panzanella.”

Most entrees are available for less than $20, although some of the specialties are more expensive.

Huston spent six years as Chef de Cuisine at The Publican, in Chicago’s Fulton Market area. His partner, John Kim, meanwhile, opened the Brothers K Coffeehouse on Main Street in Evanston in 2005. They both lived in Evanston and decided to collaborate on a new restaurant in their hometown.

Huston oversees the kitchen and back-of-the house operations, while Kim serves as general manager and keeps tabs on the front-of-the-house operations.

Menus and additional information are on the restaurant’s website.