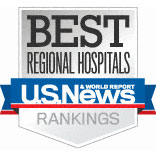 Both NorthShore Evanston Hospital and St. Francis Hospital are ranked among the top hospitals in the Chicago area in a new report by U.S. News and World Report.

The publication ranks Evanston Hospital in a tie for 9th place with St. Alexius Medical Center in Hoffman Estates. And it ranks St. Francis Hospital in a five-way tie for 17th place.

About one third of the 121 hospitals in the region made the regional best list.

"We are pleased with this national recognition of the high quality care and exceptional patient experiences that our physicians and staff create." said Mark Neaman, President and Chief Executive Officer of NorthShore. "We believe these national rankings underscore NorthShore's leadership in clinical care and translational research across the HealthSystem."