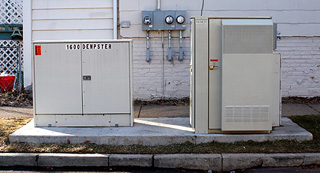 The move was seen as a temporary measure until the City Council can address a request from a citizens group that it adopt an ordinance establishing a Right-of-Way Commission to work with the Public Works Department to review such permit requests.

The action came after one resident, Edward Walton of 1600 Dempster St., complained at the council’s Administration and Public Works Committee meeting Monday about the boxes placed in the parkway beside his home.

Walton said they are noisy, obstruct the view and have been hit with graffiti twice.

He complained that they are located just six feet from his house and that AT&T trucks frequently park next to the box to service them.

So we went to take a look at the boxes and found that: 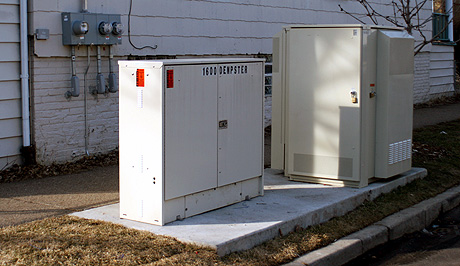 At the council committee meeting, city engineering chief Paul Schneider said that AT&T plans to install the video boxes at 94 locations in Evanston, and the city has issued permits for 89 of them. Of those, Schneider said:

Permits for at least some of the locations where work has not been completed have expired and need to be renewed, Schneider added.

Under legislation adopted by the state, the city has no authority to refuse to let AT&T install its system and only limited discretion over the location of the boxes.

Neal Levin of 1232 Maple Ave., a leader of the "Stop the Box" steering committee which urged establishment of the new city review panel, said, "A lot of people are to blame for what happened" with the AT&T high-speed video project, "but the city needs to be willing to enforce regulations to make AT&T adjust the box locations."

The aldermen referred the issue to the council’s Rules Committee for further discussion.